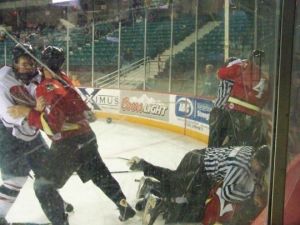 The Topeka RoadRunners can put a grueling first round series with the Wichita Falls Wildcats behind them.

Now, they are looking to take the Bulls by their horns.

In game five of the North American Hockey League South Division semifinals, Topeka narrowly escaped, defeating Wichita Falls 4-3 after a late third-period goal from Jordan Davis. But, the RoadRunners now move on to face the Amarillo Bulls, who took their semifinals series 3-1 from the Texas Tornado.

Matching up against the Bulls in the regular season, the RoadRunners went 7-4-1. After struggling to knock off the Wildcats, Topeka head coach Scott Langer knows his team will have to be stronger against a resilient Amarillo team.

“They’re a hard-working team,” Langer said of the Bulls. “They’re a team that goes for 60 minutes — coach (Dennis) Williams has instilled that in his team and we’ve seen that all year. If we have any of those lapses that we had in the first round, we’re going to be in trouble.

“We know this team well. It’s going to be a big-time chess match between our two clubs.”

The last time Topeka advanced past the NAHL South Division Finals and into the Robertson Cup was in 2008 when the RoadRunners defeated the Fairbanks Ice Dogs in a five-game series. While the RoadRunners earn an automatic bid this season due to hosting the tournament, Langer knows Topeka’s former players would love nothing more than to see the current team win the division title.

“I think we have to understand how big this is,” said Langer. “The last time we got out of this round and won the south division championship was years ago. For the players that have been in our organization that didn’t get through this round, we owe it to them to get through it.”

And while his team had the best winning percentage during the regular season, the playoffs are a different story according to Langer. His team learned that after a long series with Wichita Falls, despite defeating them 15 straight times prior to the playoffs.

“I think it was very important for our team to deal with some of that adversity and to understand that nothing comes easy at this time of the year,” said Langer. “It takes everything you have in the tank to get through.”

The series begins Friday and Saturday nights at the Kansas Expocentre. Face off is at 7:05 p.m. both nights.