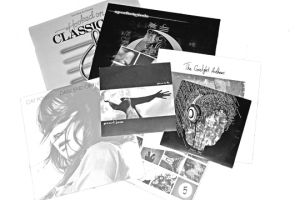 With the advent of iTunes and other music download sites, as well as the rise of Amazon.com, the local ‘mom and pop’ record stores are rapidly becoming an endangered species. Even the rebirth of vinyl amongst hipsters and audiophiles has done little to stem the tide of shrinking independent stores. Record Store Day brings together artists and independent record stores to celebrate the culture of vinyl.

“For the younger audience, they’ve grown up in a digital world, where everything’s binary,” said Steve Wilson, manger of Kief’s Downtown Music,  in Lawrence. “It’s assigned a zero or a one and whether they’re conscious of it or not, they’re rebelling against that.”

On the Record Store Day website, Ziggy Marley writes, “record stores keep the human social contact alive. It brings people together. Without the independent record stores the community breaks down with everyone sitting in front of their computers.”

Also on the Record Store Day Website, Bruce Springsteen writes, “I hate to see record stores disappear, and I’m old-school in that I think you should pay for your music. But what my kids do is download a lot of things, pay for them, and then if they love something, they’ll get the CD. That may be the future.”

Since 2007, when the event was conceived by Chris Brown, Record Store Day has been highlighted by special vinyl and CD releases made exclusively for the event, many in quantities of less than 1,000. This year’s event will feature releases from Flogging Molly, Lady Gaga, The Rolling Stones and many more. One of the many highlights will be The Foo Fighters’  “Medium Rare,” a collection of covers, which will include their infamous version of Prince’s “Darling Nikki.”

“Having something older, tactile that requires care is appealing to them [the younger generation],” said Wilson.

Sisters of Sound, 1214 C Moro St., Manhattan, will be opening an hour early for the special occasion and will have refreshments for customers. The store will also host in-store performances by different bands.

“There’s a band out of Topeka, Interior Seed, that will be the main feature. And they are awesome,” said Sarah Cunnick, co-owner of Sisters of Sound.

The store will also be holding a special 20 percent off sale on Saturday.

For those that want to have their cake and eat it, too, there are many options. Many new vinyl releases come with a download card which can be redeemed for digital versions suitable for iPods and other devices. Some turntables have the ability to burn music straight from an LP to a CD and there are also devices which allow listeners to connect their record player directly to a computer via USB cable.

“People [aged] 40 and up are rediscovering records, at first, by buying USB turntables and converting their records into digital files. But in the process, I think they also find out playing records is kinda fun occasionally,” said Wilson.

Record Store Day is celebrated every year on the third Saturday in April, but as Wilson said, “record store day is every day for us.” More information about the event, as well as a complete list of special Record Store Day releases can be found at recordstoreday.com.