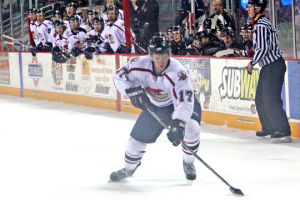 After a hard fought series between the Topeka RoadRunners and the Wichita Falls Wildcats, it’s only fitting the game would be decided in the final minutes.

During the final game of their North American Hockey League South Division semifinals, Topeka received a timely goal from Jordan Davis, forward, with just over a minute to play as the RoadRunners defeated the Wildcats 4-3 on Monday night.

Davis had not had a goal during the five-game series prior to his late-game tally. He found himself with an open shot from the blue line and ripped it on net as it sailed past Matt Green, Wildcat goaltender.

Despite several chances to bury a shot behind Rasmus Tirronen, RoadRunner goaltender, Wichita Falls could not muster a goal in the final minute to tie the contest.

The game contrasted Saturday’s, where Topeka led 3-1 with less than three minutes to play and surrendered two late goals, including one with 27 seconds remaining, to send the game to overtime. Topeka eventually lost the contest 4-3, which set up Monday night’s game.

Early in Monday’s game, Topeka struggled to find a flow to their offensive attack, despite outshooting the Wildcats. At 9:42, Jason McAloon knocked a shot behind Tirronen to put Wichita Falls up 1-0. Early in the second period, at 6:01, Tirronen attempted to clear the puck but it was intercepted and put into the net by Richard Young to make it a 2-0 lead.

But Justin Hussar cut the lead in half at 9:53 when he scooped up a rebound from a Bob Marx shot and put a backhander behind Green. After also not scoring a goal in the prior games of the series, Davis knew the goal would come for Hussar.

“[Justin] Hussar’s been struggling to score the four prior games in the playoffs,” said Davis. “I kind of had a talk with him and told him it’s going to come and so when he scored, it was a big boost for the guys.”

Following the goal, Hussar felt like the team was able to relax and just focus on trying to take control of the contest.

“We were all a little nervous before the game, because we didn’t want it to end here and we didn’t want to get embarrassed going into the Robertson Cup,” said Hussar. “I think it was a big-time goal. We had a line change and came out with energy, and it went in and definitely changed the momentum.”

This momentum carried over to their only powerplay of the contest when Middleton knocked a loose puck behind Green at 11:51 to tie the contest. Less than three minutes later, at 14:01, forward Zach Scrotenboer redirected a Trevor Campbell shot that found its way past Green to give Topeka a 3-2 lead.

“We knew if we got one goal, they’d start to come in bunches,” said Scott Langer, Topeka head coach. “I didn’t think we’d get up that quick, but we just play like that.”

It didn’t take long to return to a tie game. At 14:37, Ryan Frost, who had the game-tying and game-winning goal for the Wildcats on Saturday, capitalized on a turnover and buried a shot between Tirronen’s legs to tie the game.

The rest of the game included tough saves made by Green and Tirronen. Langer knew their fourth goal was going to eventually come.

“We stuck to the game plan,” said Langer. “We started turning (the Wildcats) over in the neutral zone, and every time they tried to make a play, we were coming up with it. I just thought it was a matter of time.”

As they move on to the NAHL South Division finals, Topeka will face the Amarillo Bulls, who they went 5-4-1 against during the regular season. Amarillo defeated the Texas Tornado 3-1 in their first round series. After a tough series against Wichita Falls, who had lost 15 straight games to Topeka coming into the playoffs, the RoadRunners know not to take competition lightly.

“There’s no black and white in the playoffs,” said Langer. “It’s always been that way. It doesn’t matter who you’re playing, it’s always a tight series. So, the good thing is, the guys that haven’t played in the playoffs, they have a sense of how tough it is now.

Topeka opens the series against Amarillo at home on Friday night at 7:05 p.m.