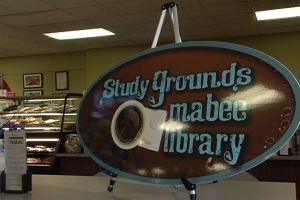 Since it’s opening in February, the kiosk has had no name. That is until the Washburn Student Government Association held a contest for students to ‘name the baby.’

Washburn senior Trent Snyder, proposed the name Study Grounds which was the name picked for the kiosk. “I got the creative juices flowing and I thought of Study Grounds and I was like ‘Yeah, that works,'” Snyder said following the unveiling of the new name.

As the winner of the contest Snyder received a free iPad 2 which he says he will put into good use. “I have had PC’s all my life, so I am actually pretty excited to try the iPad.”

University President Jerry Farley hope that the addition of Study Grounds will help students feel more at home in the library. “The library is the heart of the campus. We want this to be a comfortable place.”

Study Grounds serves PT’s coffee, pastries and sandwiches and is located on the main floor of the library.