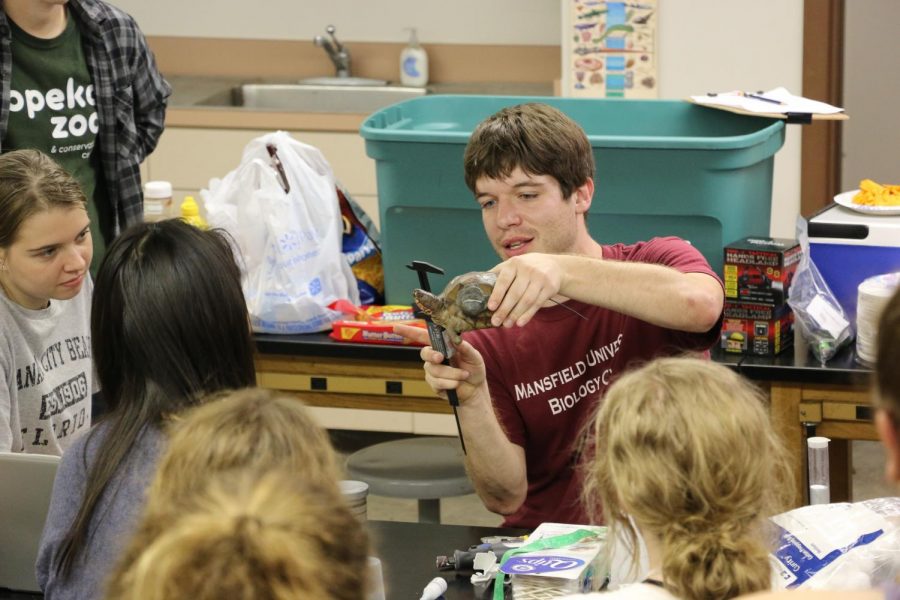 Learning: Reed teaches students how to measure. His research has led to the survival of more turtles.

When Benjamin Reed was growing up, he dreamed about being a scientist who would study dinosaur bones, dig up treasures, explore the deep sea and fill his laboratory with snakes and other creatures.

Reed’s dreams came true in many ways because of persistent hard work and his love for research. He pursued a biology degree, and quickly found that he loves to teach. After graduate school at the University of Nebraska at Lincoln, he became an assistant professor of biology responsible for 10 Washburn University courses, including the new zoo internship partnership with the Topeka Zoo. Reed wants students who are interested in animal-related fields to get experience prior to graduation.

Kansas is a good location for his research. He studies ornate box turtles, the state reptile.

“I put little transmitters on the turtles. And then I use radio telemetry. I go and find them and get information about where they’ve gone, how far they moved, and what their behavior is,” said Reed.

He has become a fabulous edition to the biology department, according to associate professor of biology, Rodrigo Mercader.

“He is very much student-centered,” said Mercader. “As soon as he started working here, he developed new opportunities for them by taking up internships right away. He brings them into the actual research and makes it very easy for them to come talk to him.”

Students this semester are working with Reed to observe behavior and record data that helps them understand variations of movement. Senior biology researcher Steven Dennis is involved in a study of the long-term memory of turtles.

“We place them into a maze that has a strawberry for a reward. And record the number of wrong turns along with the time it takes to reach the end,” said Dennis.

A second maze has red dots as markers so they can see if visual landmarks will help them to improve. They compare the results to the turtles’ home range, which is the area each one covers. The difference in home ranges spans from half a hectare, or about half a football field, to sixty hectares. The variables that influence an individual turtle’s movement affects their ability to mate and live a healthy life. The research Reed and his students conduct aids in conserving the dwindling population of the ornate box turtle.

They expect to find that a turtle who has a large home range will be more willing to explore the maze and remember it better. They discovered that turtles are individuals who have very different personalities, similar to how we see dogs or cats. Reed found that turtles vary in how far they explore, how aggressive they are and how much risk they will take.

During the winter months, he monitors the turtles’ temperatures after attaching a small device to each. Before it gets very cold outside, the turtles bury themselves about three feet deep.

“Their metabolism basically just stops. And their brains are operating marginally, and that’s about it,” said Reed.

In the spring, their body temperature and metabolism will increase, and they will emerge and be on their way.

General Organismal Biology (BI 103), Vertebrate Zoology (BI 315) and Biology of Behavior (BI 202) are a few of the courses Reed teaches. When he has time away from work, he is outdoors hiking and taking photos of wildlife.