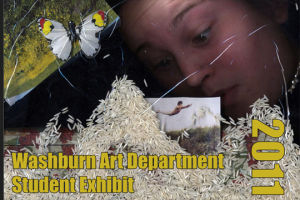 The Mulvane Art Museum on campus celebrated the opening of the annual Washburn Art Department student exhibition on Friday, April 2.

The opening was from 5 to 8 p.m. at the museum and was in conjunction with the First Friday Artwalk. In addition to showing 54 works from 37 students, awards from the museum and the art department were announced.

Cindi Morrison is the director at the Mulvane and explained the exhibit and the awards given.

“It’s a show we do every year in the spring,” said Morrison. “There is a call for entry, and this gives students the chance to submit a disc with their selections on it. Every year we select a juror and they select the pieces that will be in the exhibition.

Deedra Baker, senior art major, received the Pollack Award. In addition to having work in this exhibit, Baker also recently had her senior show at the Art Building.

“The Pollack award has been around since 1976,” said Morrison.  “It has been given away by two people who were interested in art. Their son, who passed away, was very into art so they decided it would be nice to set up a fund to help encourage students to continue to create their art.”

“It is in memory of Joan Foth who used to teach here at Washburn,” said Morrison. “She passed away last year and her work is in many collections, both private and corporate. We thought since she influenced so many students, it would be nice to give an award in her honor. We will be giving it away every year.”

Sallaway graduated with a Bachelor of Arts in December and her piece in the exhibit is a costume she made inspired by Bizet’s opera, Carmen. At the opening, she wore her piece and was a living sculpture.

“This was a workshop project where we could do whatever we wanted,” said Sallaway. “While my degree is in art, I also do a lot of theater and musicals.  This was a way for me to combine the two. I decided to use old, recycled clothes. It symbolized how Carmen is a very recycled show, done over and over again. So I gave it a fresh face, taking two old things and making it into something new.”

For some students this was their first student show. Dion Henderson is a senior Bachelor of Fine Arts student and although he took first place for a photograph in the Topeka Art Guild ‘Big Kansas’ exhibit last fall, this is his first student show.

“I have a set of three called ‘Death Morph,’ which is a morphing progress of a bowl,” said Henderson. “I also have a piece called Abstract Form, which is cart block and wheel thrown ceramics.”

Not all of the students in the show are art majors. Tony Hurt is a senior human services major and is minoring in art.

Hurt had several pieces in the student show last year and this year has a sculpture in the show, “Spirit Vessel 1,” from a set of five.

“It is porcelain, thrown on the wheel, altered with slab techniques and a wood technique; a technique of making ceramics look like wood that I discovered and have been incorporating into a lot of my work,” said Hurt.

Both Hurt and Henderson had positive things to say about the work of their fellow artists participating in the show and the show itself.

“It’s exciting,” said Hurt. “There’s a lot of great work in there and a lot of innovative ideas that are coming out of the young students—a lot of emerging artists. It’s a great show because it doesn’t focus on just one media either. It also allows students to experiment and stay outside the box a bit.”

The show will run at the Mulvane until May 5. On April 19, the museum will have an event in connection with the show, Conversations: Connecting Art to Our Lives.

In addition, ‘Surface and Form,’ ‘Works from Four Chinese Artists,’ and ‘David Hicks Overmeyer: a Kansas Original’ are still on display upstairs at the museum. For more information, including museum hours, visit the museum website at www.washburn.edu/mulvane.

“There’s a lot of diversity here,” said Henderson. “It’s rich in texture, color and form. I think it would be great for everyone to come look at.”