Raising the roof on Jayhawk Theatre 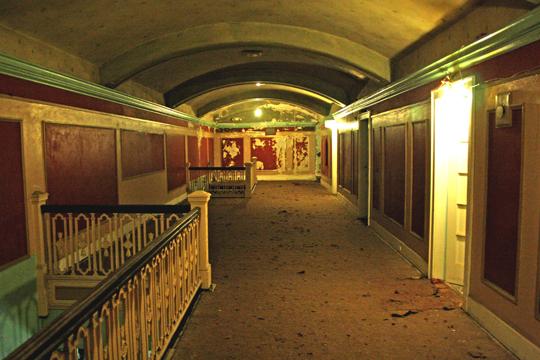 Coming to life Washburn Student Media will be hosting a benefit concert to raise money for restoration of Jayhawk Theatre in downtown Topeka on April 16. Locals hope that restoring the theatre will spark more interest in restoring downtown Topeka.

Washburn Student Media is hosting the “Jayhawk Theatre Revival Concert” on April 16 to raise money for the restoration of the Jayhawk Theatre.

The Jayhawk Theatre was originally built in 1926 and was designed by the Boller Brothers. It was one of the first theatres to have air conditioning that kept the building at a constant 70 degrees.

In 1976, the theater shut its doors to performances and the building was converted into the Jayhawk Tower in 1982. The first major steps to renovate the theatre were taken almost 15 years ago.

“The Jayhawk Theatre has been struggling to raise money for a long time,” said Brianna Holmes, senior in mass media and promotions manager for Washburn Student Media. “Restoring the theatre is a big step to restoring downtown Topeka. A lot of people think that if we get the theatre done it will spark more downtown restoration.”

Organizers hope to create more interest in the theater and raise money towards the restoration in their event “The Jayhawk Theatre Revival Concert.” Local bands will perform and coordinators hope to get sponsors for door prizes as well. Donations will be accepted at the door. The bands that will play are: Monks Wine, Chris Aytes and the Good Ambition, Bowinero and That Damn Sasquatch.

Student media was involved in a similar event in 2009 that was hosted at the Jayhawk Theatre itself. This year the event will be held at The Break Room at 911 S. Kansas Ave.

Josh Rouse, online editor-in-chief for the Washburn Review and a senior in mass media was involved in the last event.

“Last time we did this event it was very fulfilling to get so many Topekans involved,” said Rouse. “But it’s really interesting that I’m from Topeka and I had never even seen the Jayhawk Theatre until we had the event there.”

Rouse said that those who will not be able to attend the event can still donate money toward the restoration by going to the Jayhawk Theatre’s website, www.jayhawktheatre.com.

“It’s a really big part of our history and I think we need to preserve that,” said Rouse. “Keeping it for future generations is important.”