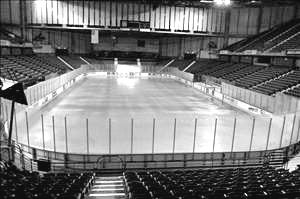 Topeka may soon be the home of the world’s biggest sport. Move over MLS, the Professional Arena Soccer League is coming to town.

The PASL initiated the process of creating a new franchise, the Kansas Magic. B.J. Latas, the owner of the new franchise, is optimistic about the future of arena soccer in Topeka. The real test of the popularity of the sport will come in the form of an exhibition game on April 30 between the Magic and Illinois Piasa. Latas and Kansas Expocentre officials are hoping for a strong turnout selling around 4,000 seats. Latas expressed his gratitude for the working partnership with the Expocentre that they have developed throughout their process.

“We need to prove to them that we deserve to play here,” said Latas. “They have given us the right tools to get this done.”

Beyond the exhibition game, the PASL and the Expocentre have no long-term commitments in mind as of yet. The wait and see prospective is something that both sides see as a logical point to start from. According to Latas, the Expocentre doesn’t want to commit to a season’s worth of dates until there is proof of the popularity of the sport in the community via attendance numbers for the exhibition date.

Beyond the possibility of soccer in Topeka, the Expocentre also is keeping itself from committing at the present time in part due to the fact that with the arena football Kansas Koyotes and the hockey team Topeka Roadrunners currently housed at Landon Arena, it would be a tight fit for the facility to house another tenant on the schedule. The Expocentre will continue to watch and proceed cautiously as the process for another professional franchise in Topeka proceeds.