Review of The Hangover Part II 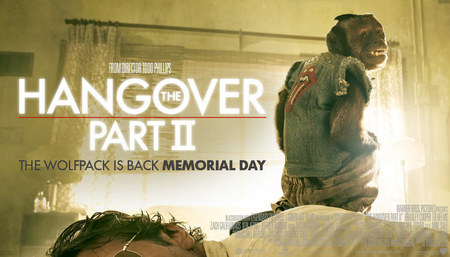 Todd Phillips returns in the directors’ seat to bring you the sequel to the hilarious smash hit The Hangover, The Hangover Part II.

All of the original cast returns for more kicks and laughs as they head to Thailand for Stu’s wedding.  Stu is determined to have a non alcoholic bachelor’s party at IHOP to keep save so nothing like what happened in Vegas will happen again.  Once Phil, Stu, Alan and Doug arrive in Thailand along with Stu’s fiancé’s little brother Teddy played by Mason Lee decide to have just one drink and true to form they wake up with no recollection of the previous night.  This time they find themselves in a cheap Bangkok hotel with Teddy missing.

The movie is now showing in theaters nationwide.

Dulle: I really enjoyed this movie; it really brought in what I was expecting.  I feel like Todd Phillips really knew his audience, knew what they wanted and he delivered.  It was one of those movies that sort of rehashed the first movie but unlike other comedies when they do rehashing of the previous movie on a sequel doesn’t work.  With this one it’s almost like the first one but has a completely different story and I feel like you’re going to laugh if not just as much in the first movie but more.  I would see this movie again and again because I know I’m going to laugh every single time.

Grammer: “It’s usually pretty hard when somebody tries to make a sequel of a popular film.  Many times it fails and doesn’t meet expectations, especially when they just rehash the same plot which is what they did here but this was a completely different result.  It was rehashed but in a way it didn’t look like oh we’re just trying do the same thing again to get people to come see the movie.  It seems like the writers really put some thought into the plot on how to make it the same because I think that’s what they thought people wanted and they were right.  They delivered something that was recognizable to the first one but can also stand on its own and was absolutely hilarious.”

Dulle: “Do you think it’s possible for a third film or should they just leave it here?

Grammer: “I think it wouldn’t be smart to try their luck again because if you just keep making sequels eventually it’s not going to work out.  I think they did an awesome job being able to pull out the second one just as good.  I even heard murmurs coming out of the theater from other people that it was better than the first film.

Dulle: “The first Hangover movie won an Oscar in 2009 for best comedy of the year, do you think this one is up there?”

Grammer: “I think it is up there, I don’t know who’s a Jim Carrey fan but I don’t think Mr. Popper’s Penguins is going to win any awards but who knows, maybe they will blow audiences away with that one.

Dulle and Grammer both give this movie 4 out of 5 Top Hats, if you enjoyed the first Hangover, you will certainly enjoy this one.