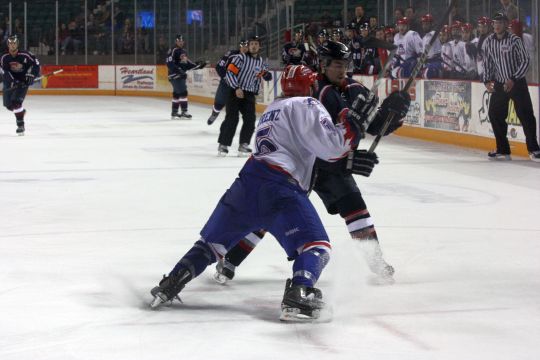 Thou shall not pass Michigan defenseman Ryan Trenz collides with Topeka forward Kyle Sharkey on Thursday night. The collision was similar to many on Thursday, as Topeka struggled to create scoring chances in their 5-2 loss.

It just wasn’t meant to be for the Topeka RoadRunners.

Following two tough losses to the hands of the Fairbanks Ice Dogs and Amarillo Bulls, Topeka wrapped up its participation in the Robertson Cup Championship with a 5-2 loss to the Michigan Warriors on Thursday night at Landon Arena.

After being crowned the North American Hockey League’s best team in the regular season and coming one win away from clinching the south division championship, it was a frustrating final game for the team.

“It was that feeling the whole the night that it was just not meant to be,” said Scott Langer, Topeka head coach. “We played hard. Again it was those bounces that just seemed to find the back of the net. And we just couldn’t find any offense.”

One of the first bad bounces of the contest came late in the first period when a shot fired on net deflected off of Topeka defenseman Jacob Poe’s stick and found its way behind goaltender Rasmus Tirronen to give Michigan a 1-0 lead.

At the 5:46 mark of the second period, Michigan forward Brad Chapman was able to fire a rebound past Tirronen to give the Warriors a 2-0 advantage. Topeka grabbed a bit of momentum while on the powerplay when forward Jordan Davis poked a loose puck behind goaltender Robert Tadazak at 7:07.

A late second period goal by Robert Kolb brought it back to a two goal deficit when he flipped a loose puck past Tirronen, who appeared to have lost sight of the puck moments before the shot.

Despite the 3-1 deficit, in the third period, the RoadRunners were still in the contest until two goals at the 9:52 and 13:04 mark of the third period put Michigan up 5-1. Forward Martin Grouse’s goal at 13:04 was scored on a penalty shot.

Defenseman Bob Marx put a slap shot past Tadazak at 15:16, but it was one of only four shots fired in the third period by the RoadRunners.

With so many inexperienced players on the roster, Langer said his team struggled in the tournament games. However, he also reiterated the positives to take away from the season.

“The mistakes we did make were young mistakes that were very costly,” said Langer. “But we had a good season. The ultimate prize is that Robertson Cup and we sure wanted it, but I’m not going to look past all the success we had.”

Ending the season on the defeat of Thursday’s contest, Langer said he would make sure to tell his team he was proud of them.

“You just have to reassure them that they were a successful hockey team, and they accomplished big things for our culture,” he said. “But they do have to learn a valuable lesson. Wherever they go next, they need to take this feeling with them.”

The final two games of the Robertson Cup Championship were played Friday and Saturday. Michigan defeated Amarillo 6-2 on Friday to advance to Saturday’s title game against Fairbanks.

Fairbanks defeated Michigan 4-2 in that contest, propelled by three goals in under four minutes late in the third period. It is their first Robertson Cup Championship victory in franchise history.