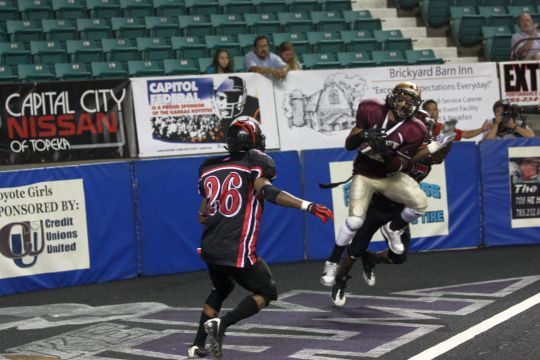 What's the catch Koyotes receiver Mike Williams hauls in a touchdown pass on Saturday night. Williams' reception wound up being the game-winner as the Koyotes defeated the Springfield Wolf Pack 32-26.

A season once filled with bleak playoff chances has progressed immensely in the last few weeks for the Kansas Koyotes.

Kansas (3-5) took a large step towards the playoffs on Saturday as they defeated the Springfield Wolf Pack 32-26 at Landon Arena.

“We’re where we want to be,” said Jermaine Smith, veteran defensive lineman. “In the beginning, we knew we had to be where we are now. It’s a great accomplishment, because we had a lot of young guys. We’re finally starting to play ball. We’ll be alright.”

The game hinged heavily on a defensive stand by the Koyotes defense late in the game. With 32 seconds left, a fourth down on the Kansas 2-yard line saw a pass fell incomplete as the Koyotes ran out the clock from there.

“We didn’t bring that fire to start the game, but obviously in the second half we did,” said Troy Biladeau, Kansas head coach. “In the first half, it wasn’t an X’s and O’s thing, it was ‘are we going to tackle or are we not.’ I thought the defense really stepped up in the second half, and the offense played a lot better, too.”

The woes in the first half included a fumble on the opening kickoff by the Koyotes to set up a 2-yard touchdown run by Wolf Pack running back Larry White.  After an 11-yard touchdown reception from Kansas quarterback Carlos Kelly to Shinskia, Springfield rattled off two straight touchdowns to lead 20-6.

As Springfield prepared to head into halftime by that score, Kelly thought otherwise, as he scampered for a 1-yard touchdown rush. Following an extra point, the score sat at 26-13 at halftime.

Kelly finished the contest with 10 completions for 96 yards with three touchdown passes and one interception. While no players other than Kelly had over 40 yards of offense, the importance to Biladeau was the victory.

“I told [Koyotes owner Ralph Adams] before we even started that the first few games were probably going to be a struggle,” said Biladeau. “The one thing I’ve been stressing this whole time is the playoffs. I’ve never said anything about a record to anyone. I don’t care about what our record is. I want to be in the playoffs and see what happens.”