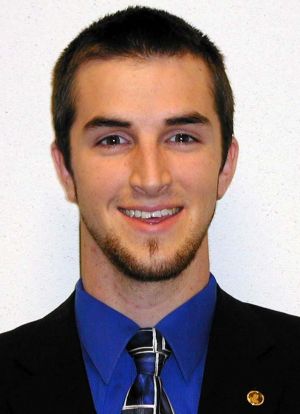 Bryant was selected as one of the top 120 undergraduate members in the country, from a pool of over 15,000.  The Ruck Leadership Institute focuses on the leadership principles espoused in one of the best- selling leadership books of all time, The Leadership Challenge, co-written by Barry Posner, a nationally renowned leadership expert and SigEp alumnus.  The program is one of the ways SigEp lives up to its mission: “Building Balanced Men”.

Bryant said he was excited to understand the complicated nature of a national fraternity. “Having sixteen thousand undergraduate brothers makes for a huge organization, I just wanted to learn about to create change at such a large level,” he said.

Bryant, a senior from Independence, KS., is studying for a degree in corporate communication, cultural leadership and maintains a 3.8 GPA. Currently, Bryant serves as the vice president of membership development for the local chapter of Sigma Phi Epsilon. He is planning in going into training and development and eventually become a professional facilitator.

Brain Warren, executive director of the Fraternity, said, “I am confident that these students will go back to their campuses ready to take on leadership roles with new skills and determination, as I did when I completed the program in 2002. The opportunity to learn from the most talented and highly accomplished leaders in our Fraternity gives these young men a distinct advantage as they embark on their careers.”

The Ruck Leadership Institute is named in honor of Frank J. Ruck Jr., a former Grand President of SigEp and a visionary in developing leaders. He was an inspiration for many generations of SigEp members to reach their full potential as leaders in all aspects of their lives.

Sigma Phi Epsilon, established in 1901, is one of the nation’s largest fraternities, with over 15,000 undergraduates on 240 campuses across the United States. Its mission is “Building Balanced Men”, which is achieved through a four-year member development program that has contributed to a fraternity-wide GPA of over 3.0, a focus on the principles of Sound Mind and Sound Body, and service learning efforts that allow members to develop leadership skills while giving back to the community.