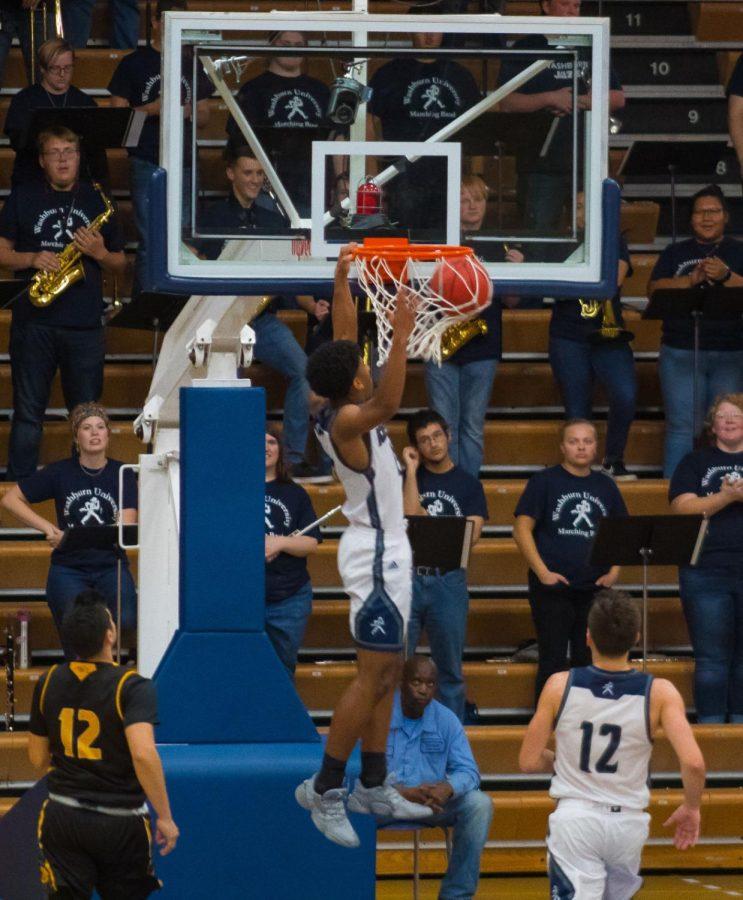 Looking to bounce back after their Nov. 15 57-55 loss to Rockhurst University, the Ichabod men’s basketball team were set to face an undefeated Ottawa University squad the night of Wednesday, Nov. 20.

Washburn started the game off well. Two buckets in the paint by sophomore forward Jonny Clausing and a triple by guard Jalen Lewis gave the bods a 7-0 lead to start off the game.

Clausing continued to be dominant in the early game, scoring seven of Washburn’s first 11 points.

The game started to take an interesting turn as both teams began to shoot many three pointers. Fortunately for the Ichabods, Lewis could not miss, and he scored twelve straight points that gave Washburn a 28-13 lead with 13 minutes left in the first half.

The shots behind the arc stopped falling for the Ichabods and Ottawa was able to close out Washburn’s lead to only eight points at 30-22 with nine minutes left in the half.

After a media timeout Washburn was back on track and started another 7-0 run that extended the lead to 37-22 with five and a half minutes left.

The bods went on to outscore Ottawa 15-7 for the remainder of the first half, with help from a last second triple by Lewis that finished the half with an impressive 25 points. Washburn finished out the half on top with a 52-29 lead.

The second half started a little more competitively with both teams being able to score despite good defense displayed by both sides.

Washburn was not being very efficient in its first offensive possessions, as they turned the ball over a couple of times. But once again the efficient three-point shooting by junior guard Tyler Geiman helped the bods to maintain their lead in the early minutes as they led 63-40 with 13 minutes left.

As the minutes ticked by and the game started to come to an end, Head Coach Brett Ballard gave players with less experience some valuable playing time. Freshman guard Tyler Nelson had an outstanding night off of the bench and helped the bods to close out the game with a 103-73 win over Ottawa.

Head Coach Brett Ballard weighed in on how well the young players that came off the bench performed in the game.

“Those guys are really good. It’s good to finally get them some minutes. Hopefully they will get more comfortable out there,” said Ballard.

“The team did really good today. I think we just got to tighten a couple things up defensively, but offensively we had it working tonight and it is just good to see everybody confident and throwing the ball in,” said Lewis.

The Ichabods moved to 3-1 in the season and will host Southwestern Oklahoma State University Friday, Nov. 26 at Lee Arena.