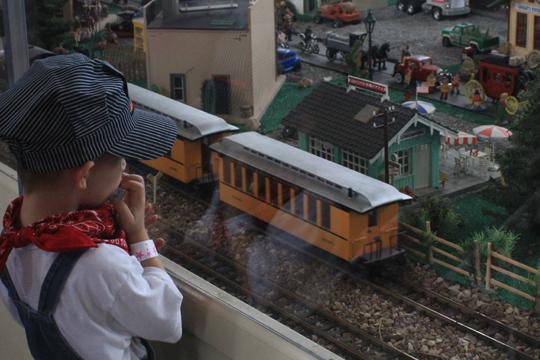 All Aboard A young kid stops to observe a model train as it passes by at The Great Overland Station's fourth annual Railroad Festival on August 20, 2011

As the summer comes to an end for the youth of Topeka, one last fun event helped to bring entertainment to the masses and celebrate a part of the capital city’s heritage.

Railroad Festival, known in the past as Railroad Days, kicked off Saturday morning at the Great Overland Station in downtown Topeka. Visitors were greeted early in the morning by mild temperatures and a variety of activities to enjoy that ranged from carnival games to a bounce room to educational exhibits on railroad safety.

In particular the railroad safety exhibit featured a car that had been in an accident with a train only traveling 20 mph. The resulting crumpled and devastated car on display left an impression on many attendees.

“I think its really cool but also really scary looking,” said Julie Lynch, Topeka resident. “This is one of those things that will really stick in your mind when you cross train tracks. I know I’ll be thinking of it.”

As the morning gave way to the afternoon, many attendees took advantage of the plethora of food choices available with food ranging to the meaty in Big Dog BBQ to the more standard outdoor event food offered by such vendors as Kenny’s Concessions. Many in attendance were looking for that specific kind of food they associate with the experience of Railroad Festival.

“I always get a funnel cake at [Railroad Festival],” said Josh Nance, Topeka youth. “I love when they are fresh and covered in powdered sugar.”

Festival attendees also were able to sit under tents while eating and enjoy live music that played throughout the day. Styles ranged from acoustic guitar sets to classic rock played by full bands..

While a diverse amount of activities were available outside, inside the Great Overland Station children and adults alike were able to enjoy the intricately set up model trains on display courtesy of the Topeka Model Railroaders. Children in particular took great delight in watching the trains make their rounds across the miniature landscapes.

“I thought it was really cool,” said Sadye Innes, 7-year old Topeka resident. “The trains are so tiny.”

With a little bit of everything for everyone available to enjoy, the event was well attended this year according to festival officials.