Cornerback Desir no longer a member of Washburn football team 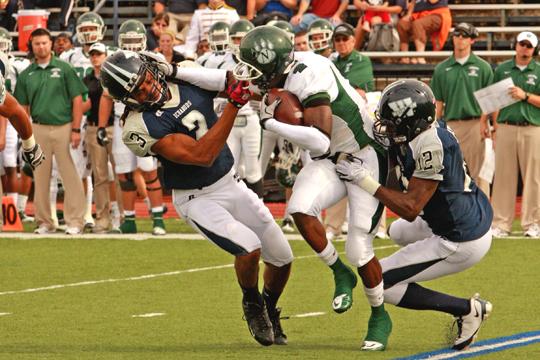 Double trouble Washburn’s Terry Grimmett, left, and Pierre Desir team up to tackle a Northwest Missouri State player. The Ichabods came close to their upset bid over the No. 5 Bearcats but fell short, 40-41, on a failed two-point conversion.

Head football coach Craig Schurig announced at Saturday’s Media Day that the team has lost another player this offseason—junior defensive back Pierre Desir.

Desir, who earned all-conference and All-American honors during his two years as starting cornerback for Washburn, accumulated 12 interceptions during his career and was a key defensive returner for the Ichabods.

“He’s not here, he did not report,” said Schurig. “We kind of held hope that maybe he would but he decided to stay home in St. Louis due to family obligations so he’s not on our team. He’s left the team.”

With his loss, senior Patrick Jean will fill in the starting role at right cornerback, with juniors Terry Grimmett and Devon Connors expected to play in the rotation, as well as senior Steven Dudley. Despite the loss, Schurig said the defense should have a good season.

“Our defense returns a lot of guys from last year,” said Schurig. “We get Casey Curran back at free safety and Jahmil Taylor at inside linebacker, Marty Pfannenstiel at a safety position, Dakota Johnson at a defensive end, Cameron Jackson at defensive end, Ian Williams at D-tackle, we really have some very good players, as good anybody we’ll see, and should be all-conference type guys. We’re looking forward to a good year on defense.”

The news comes especially hard for the Bods following the recent loss of junior running back Vershon Moore, who was arrested by Topeka police on Aug. 9 in connection with aggravated robbery. Schurig said he hadn’t spoken directly with Moore since the incident, but has communicated with his family and received information about the legal situation from them. In his stead, senior running back Justin Cooper is expected to start, with redshirt freshman Sean McPherson backing him up.

“With his situation, we’re kind of in a stance right now where we’re not really saying anything,” said Schurig. “It’s an on-going process, their really hasn’t been anything done university-wise, so right now it’s kind of a no-comment situation and just kind of waiting and seeing.”

Both players have been removed from the roster on the Washburn football media guide and WUSports.com. Jermon Watson, a redshirt-freshman linebacker who passed away June 11, 2011, remains on the roster.