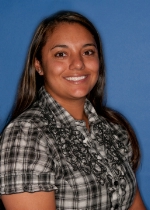 Washburn Athletics Director Loren Ferré has announced Vanessa Becerra has been named the 14th head coach in the Lady Blues’ softball program. Becerra takes over for Lisa Carey who resigned after the 2011 season.

“We’re excited to have Vanessa lead our program,” Ferré said. “She comes from a winning program which was started from scratch and has been part of Metro State’s program since the very beginning. She has gained experience with three years as an assistant coach and one as the interim head coach. We look forward to her leading the program on the field, in the classroom and in the community. “

Becerra has spent four seasons with Metro State with the last season as the interim head coach leading the Roadrunners to a 34-18 record winning the Rocky Mountain Athletic Conference regular season championship while advancing to the NCAA regional tournament for the third straight season. In 2010, Metro State finished third in the nation in home runs per game and 16th in the nation in slugging percentage while leading the RMAC in runs scored per game and home runs.

The Roadrunner pitching staff was also successful as they were second in the RMAC in earned run average and third in opponent batting average in conference games with four players earning all-RMAC postseason honors.

As an assistant coach in 2010, the Roadrunners won their second straight RMAC crown advancing to the NCAA College World Series in St. Joseph as Metro State finished the season 53-6 including a 37-2 record in RMAC action. The coaching staff was honored as the National Fastpitch Central Regional Coaching Staff of the Year. The Roadrunners also set an NCAA record for home runs in a season with 112.

During the 2009 season, Metro State was 40-12 overall winning the first of its three straight RMAC Championships.

In 2008, in the Roadrunners first season after the program was reinstated, Metro State was 26-11.

Active in the community, Metro State partnered with the Denver West High School softball team working with them on life skills, academic and personal pressures leading to an award from the NCAA for its community engagement efforts.