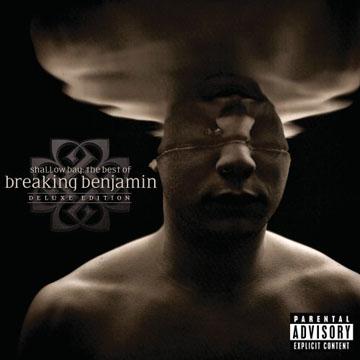 Greatest hits albums usually mark a turning point in a successful band’s career, whether it is number of albums released, anniversaries or as Monty Python once titled their own hits package, “Contractual Obligation Album.”  They don’t, however, usually cause a band to implode. Breaking Benjamin’s  “Shallow Bay: The Best of Breaking Benjamin” managed to do just that.

According to a report from billboard.com, the remix of “Blow Me Away,” which features prominently on “Shallow Bay” was not authorized by singer Benjamin Burnley but was instead approved by guitarist Aaron Fincke and bass player Mark Klepaski. At the time of the release of the remixed “Blow Me Away,” the band was already on a “hiatus” due to Burnley’s illness and inability to tour and the remix situation further complicated a situation that led to the eventual termination of Fincke and Klepaski from the band.

Drama aside, “Shallow Bay” offers an adequate overview of the post-grunge band’s career from its self-titled debut EP all the way through 2009’s “Dear Agony.” While not necessarily a huge fan of Breaking Benjamin, there are at least enough songs on the album that I at least recognize to justify calling this a “best of” album. “Polyamorous,” a minor radio hit from the band’s 2002 album “Saturate” starts off the album in a rather generic manner, which I suppose is appropriate for the band.

“So Cold,” one of the few Breaking Benjamin songs I actually like, is definitely the standout track on the album. The song, which featured in the movie “Hellboy,” brings a strong presence to an otherwise somewhat bland and generic album.

The rest of the album plods along in such a fashion that leaves me lumping Breaking Benjamin into the same pile of generic, clichéd rock as Creed and Nickelback. Listening to the previously mentioned remix of “Blow Me Away,” I am struck by both a question and an answer. First, who is “Valora” and why were they unnecessarily grafted onto this song?

Secondly, this question also provides the answer to the question of why Burnley fired his band mates. In his suit against his former band mates, Burnley alleges that Fincke and Klepaski were offered $100,000 by the band’s record label to approve the song.

If you are a fan of Breaking Benjamin, it might be worth the effort to track down the deluxe version of “Shallow Bay,” which offers an additional disc of rare songs and acoustic performances. I often enjoy acoustic rock so I actually enjoyed this bonus disc more than the actual album. The songs “I Will Not Bow,” “Polyamorous,” “Until the End” and “Breath” all benefit greatly from the acoustic treatment.

As a “greatest hits” package, “Shallow Bay” offers a look at a band that often failed to live up to its own inadequacy.