WU to tangle with Sioux 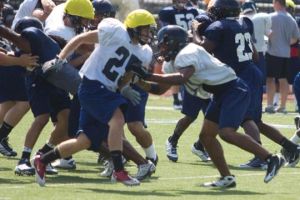 Washburn football kicks off its season on the road against the Sioux Falls (South Dakota) Cougars on Sept. 1. The Cougars are moving from the NAIA (National Association of Intercollegiate Athletics) to NCAA Division II, the same division as Washburn. Last season, Sioux Falls won 13 games and lost only one. They received votes to be in the 2011 American Football Coaches Association (AFCA) Preseason Poll for Division II, but they didn’t make the Top 25.

The Ichabods went 8-4 last season, concluding the year with a Kanza Bowl victory. Ranked number 18 to start the season, the expectations are high for Washburn.  They have opened the season with a victory four out of the last five years, with this season marking the first time the season opener has not been played against the Colorado School of Mines since 2007.

Washburn will face a tough game with Sioux Falls, but it is difficult to avoid looking ahead to the big game on Oct. 22 against the Northwest Missouri State Bearcats.

The Bearcats, ranked thid in the preseason AFCA poll, have defeated Washburn in each of the past five seasons, but each game has been decided by five points or less. Of Washburn’s five losses to the Bearcats, two were by a single point and another was an overtime loss.  This game will be homecoming for the Bearcats and will be the first time Northwest Missouri State will play Washburn since the retirement of Bearcats’ head coach Mel Tjeerdsma, who lead NW Missouri State to three national championships and four national runner-up finishes.

Washburn faces its rival, the Emporia State Hornets, on Oct. 1 in Emporia. The Ichabods have won the last five contests, including a 42-0 victory last season, but the rivalry is always an important match-up to both sides.

Another interesting game for the Ichabods this season is against the Pittsburg State Gorillas, the school where Washburn head coach Craig Schurig was an assistant before coming to Topeka. The game will be another road test when Washburn travels to Pittsburg, Kan. on Nov. 5.

Washburn will try to carry that success over into a fast start to 2011.