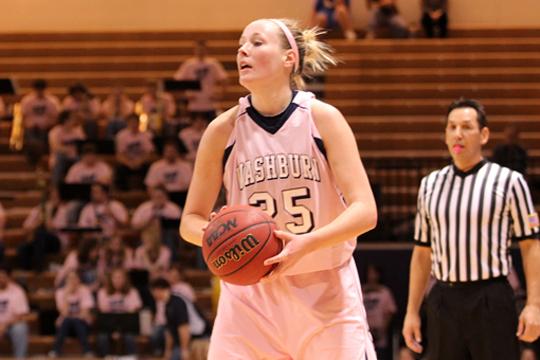 Athletes push themselves harder and harder everyday with intense practice schedules, hours of schoolwork piling up and adrenaline pumping games. It almost seems as if an athlete isn’t afraid of anything, but what is the one thing that almost every athlete fears? Is it the rigorous hours of practice? No. It’s the cracking of bone, the tearing of muscle, the dull ache that last for weeks—yes, athletes fear being injured. Why? A single injury can happen within a single moment and then take months, even years, to fully heal. Recovery time is an endless task to an athlete. Sierra Moeller, Washburn’s six-foot-two forward, knows this.

As a sophomore, Moeller had a season ending knee injury in the first five minutes of the second game of the season.

“I had transferred into Washburn University after spending two years at Boise State. I spent my first year being red-shirted and then, when I was finally able to play, I tore my ACL,” said Moeller.

When asked what was the greatest outcome to her injury, Moeller spoke of how her perspective changed during her recovery period.

“I think that I’ve learned not to take anything for granted,” said Moeller. “”I would’ve killed to have been able to do sprints when I wasn’t able too, every sprint during practice, every last minute drill—it all mattered in the end.”

According to Moeller, a basketball player has to give everything to all aspects of the game, their heart, energy and even mindset.

“Having a tougher mindset when you’re injured will teach you many things,” said Moeller. “You learn a lot about yourself when you’re injured, going from starting to sitting at the end of the bench. I think that cheering on my teammates helped me learn, as a person, to deal with not being able to do something I’ve always been able to do.”

With the Lady Blue’s season quickly approaching, Moeller knows to be mindful of her injury; not afraid it.

“No,” Moeller said, “I’m not afraid of reinjuring myself. It’s taken nine months to recover, and I’m slowly but surely beginning too as well.”

With two knee surgeries, one in each leg, Moeller has had time to safely prepare herself for time on the gym floor.

“This summer playing up with the team was intimidating at first, I had to think about what my body was doing instead of just not thinking at all,” said Moeller. “One of the biggest tings I learned was that when I came back I told myself that I wouldn’t wear a brace, and I came out with a mindset that I wouldn’t play scared because that is truly how an athlete gets hurt.”

After nine months of recovery time, Sierra was ready to pick up the ball again and now, a few months before the season starts—the entire team is right there with her.

“My teammates and I get along great,” Moeller said. “I feel that, this year especially, our team chemistry is very good. We have expectations for ourselves this season and so does our head coach, Ron McHenry.”