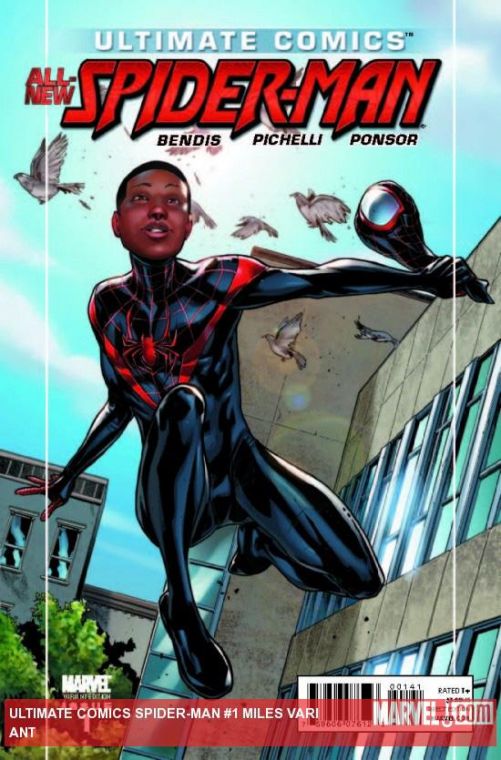 For the uninitiated, Marvel’s Ultimate Universe is a separate entity from their main line of comics.  Originally, the imprint was designed to bring in new readers and slowly transfer them over to regular Marvel books.

However, after 10 years of telling alternate-reality tales of Spider-Man and the like, the ultimate universe now bears an even smaller resemblance to the Marvel Universe. For instance, Ultimate Peter Parker is dead after being shot by the Green Goblin.

While Parker is running around in movies, TV shows, and half of every other Marvel comic series, writer Brian Michael Bendis and artist Sara Pichelli work their magic to make Morales everybody’s new favorite superhero.

While Morales already appeared as Spider-Man in “Ultimate Fallout,” this story shows his background and origin before he ever wears the tights. It’s understandable if readers are left wanting more in terms of superheroics and action, but Bendis plays the slow game and definitely has plans for the future of the title (pay special attention to the number 42), just as he did when he launched the original “Ultimate Spider-Man” starring Parker in 2000.

The first issue puts crime-fighting on the backburner in order to introduce Morales and build his corner of the Ultimate Universe. Bendis and Pichelli make sure that Morales isn’t Parker with a different skin color. In fact, Morales’s race is not mentioned at all. For the moment, it’s refreshing to see a Marvel hero with both his living still alive, but time will tell if Morales’s new Spider-Man is born of tragedy like Parker or because of his own desire to do what is right and be accepted like DC Comics’ Superman.

Even though Morales’s parents are both alive, the family dynamic still has its cracks. Pichelli excels at character moments in the book such as when Morales is accepted into a new school via lottery. His parents are ecstatic for their son, but Morales has disdain for the idea of the lottery and that he got in while other children are crushed by being rejected.

After the lottery, Morales goes to see his uncle when he is bitten by a new mutated spider.  After a phone call to Morales’s father, it is clear that the grown-ups do not like each other and we see Morales use his powers for the first time, another opportunity to show how he is not a carbon copy of Peter Parker.

The issue has strong character moments, beautiful art, and is definitely worth the attention of any curious spider fan.

This issue may be the polar opposite of “Ultimate Spider-Man” in terms of storytelling, but it is still the most entertaining offering from DC Comics’ second week of the New 52.

Deathstroke, also known as Slade Wilson, is already well into his career as a mercenary and assassin at the beginning of the issue and writer Kyle Higgins and artist Joe Bennett do not shy away from action and violence.

Wilson has been relegated to bodyguard work and desires to be the most fearsome man on the planet again. He is brought into a new mission and joins forces with the Alpha Dawgs. Bennett draws the best “acting” in his career with the annoyance of classic tough guy Deathstroke and his new partners for the MTV crowd.

DC had a strong showing this past week with “Frankenstein: Agent of SHADE” and “Demon Knights,” but “Deathstroke” is the company’s best book of the week.  Big action, gallows humor, and a genuinely surprising twist make this a must-have for actions fans that are new to comics and older readers mourning the loss of DC’s terrifically violent and hilarious “Secret Six.”

All that is known in the first issue is that a second-generation KGB sleeper cell is located Cuba and the time has come to invade the United States.

Meanwhile, New York cops a interrogating a woman about the sleeper cell, but as expected, she is uncooperative.

Cosby is known mainly for editing all-ages titles at Marvel, but now that he is writing his own series free from editorial confines, the swears come out in full force.

This issue is a tad light, but “Pigs” has a great last page, and creator-owned comics need all the help they can get with DC’s New 52 and Marvel’s big event comics and relaunches.