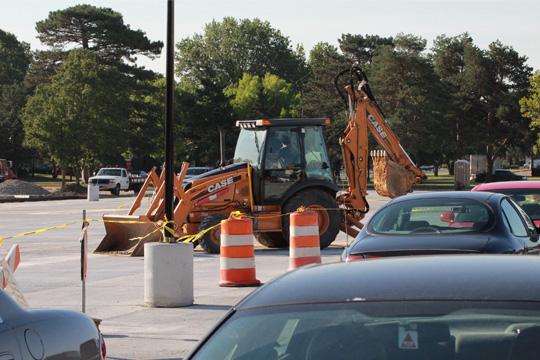 What parking problem' With construction on the parking lot near Petro Allied Health Center running behind schedule, students at Washburn have faced a daily challenge of finding a place to park. Rick Anderson, vice president of administration and treasure, calls it a "walking problem, not a parking problem."

Gridlock. Running late. Creeping through the parking lot. These are all things that students tend to associate with going to school at Washburn.

Recently, the university has been undertaking a systematic approach to repairing facilities around campus. Among those projects has been the largest of the parking lots on the east side of Petro Allied Health Center. At an estimated cost of over $1 million dollars for the entire campus wide project, the Petro parking lot was targeted as the first in a series of infrastructure improvements.

Students however wonder why Washburn decided to undertake the project at the time that they it did.

“What students don’t realize, is that the campus continues to run even though they’re not here in the summer,” said Rick Anderson, vice president of administration and treasurer. “Petro in general has a lot of particular activity; Sunflower State Games, basketball, volleyball camps etc.”

While all of those facts are true, the question still remains. Why now as opposed to earlier in the summer?

According to Anderson, the process for beginning the infrastructure improvements began back in May of this year. As the system currently stands, Washburn administration cannot spend more than $50,000 on a project without Washburn Board of Regents approval.

With that in mind, the initial process of submitting a bid for a contract began at the beginning of the summer. After going through the approval process, the board of regents approved the bid in June at the end of the month. As a result of this, the absolute earliest that the university could have moved on the project would have been July 1.

With the consideration of the busy schedule during the summer, the administration took a look at the schedule and tried to determine a period of time in which the project could be completed without undue inconvenience to the campus community.

Towards the end of July was when the project was started. Since then the project has met with some adversity due to weather conditions keeping crews from being able to stay on schedule.

“Right now I expected two-thirds of [the parking lot] to be open,” said Anderson. “Really not quite half yet is and they’re still pouring concrete. Two-thirds will be open in another week.”

Students however, still feel that Washburn needs to build at least a small amount of more parking on campus.

“On Monday, Wednesday, Friday I have to park all the way out on Boswell [street],” said Ryan Caldwell, junior art major. “Its just nuts. I mean I think they should have started working on the parking during the summer.”

In response to many students grumblings about the lack of space and availability, Vice President Anderson expressed his view that many students were reacting early on in the year to the first week of classes in which many more students are on campus than will be seen throughout the bulk of the semester.

“Clearly the first week on campus, everyone is trying to figure out things,” said Anderson. “Even if we had the Petro lot, we would still have parking issues. This is natural to every campus. New freshman, everybody coming to campus start of the semester, between [9 a.m. and 1 p.m.] everybody descends.”

While some students might complain about the parking, Anderson feels that Washburn is really giving students a privilege for free that other universities take advantage of students on.

“You know its an interesting perspective,” said Anderson. “I’ve been on a lot of campuses and this is the easiest campus to park on that I’ve ever been on. Students don’t know any different. All they know is what their situation is here. We don’t charge for it and in most cases, other than certain narrow windows, [parking] is not a problem on this campus.”

In fact according to Anderson, students don’t have a parking problem as much as they have, what he terms as “a walking problem.”