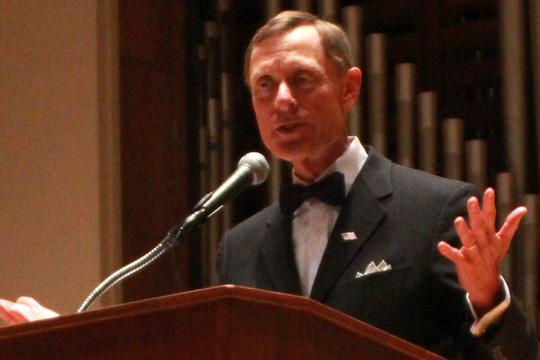 Each year is a new beginning for Washburn. For each of these new beginnings comes the annual address of President Jerry Farley in what has been coined the, “state of the university” speech.

Farley started off his address with a few elements that are familiar from his opening year addresses, recognizing faculty and students that had achieved honors and outstanding performance while representing the university in different academic and athletic pursuits.

Farley then found a couple of key ideas which he homed in on throughout his speech.

“I have a couple of ideas I think we can embrace this year and change the way we do things at Washburn,” said Farley. “To me, I am always amazed at how much vitality there is at Washburn.”

Farley expressed his excitement for the coming year as he talked about students returning and their energizing the campus. Farley also emphasized collaboration to the faculty in the audience as well.

Among the two key concepts Farley’s address centered around, innovation was his key thrust.

“Our success on our campus will be in our openness and in our connectivity with one another,” said Farley. “At any point in time there is an opportunity for extraordinary change in our world, but at any moment only certain changes can occur and do occur.”

Specifically the president pointed to the two numbers by which universities around the country are measured; student retention and graduation rates. Farley gave examples in which other areas of the country have linked funding of higher education to these performance numbers.

The president then challenged faculty and staff to seek to raise those numbers.

“Our mission is to educate students and to help the succeed,” said Farley. “These metrics are not simple percentages, they are not simple numbers. They represent a student. I challenge each one of us to create an environment that is innovative so that we can improve not only these metrics, but the underlying learning that must also occur.”

The president then pivoted to the topic of results from last year’s National Survey on Student Engagement. The NSSE was given to both freshman and seniors as a way to gauge how students viewed their time, both at the beginning and end of their college careers, at Washburn. According to Farley, in most categories there was an increase in performance standards since the test was last administered in 2007.

“Even despite the improvements, we remain about average,” said Farley. “We can do better than that. We are better than average. I challenge all of us to do the things that are necessary for us to improve those scores.”

The president then talked about the current financial challenges facing Washburn. With the end of funds from the federal stimulus of 2009, Washburn now faces shortfalls in funding. Farley alluded to the need in the future to explore the option of raising tuition. Farley also explained the recent decision to offer certain areas outside of Kansas in-state tuition prices in an attempt to get more students coming to Washburn.

“Recruiting from outside the state has several benefits,” said Farley. “The students contribute to the university and the local economy. Furthermore, there is a high probability that students will want to stay.”

“I care very deeply about this university and about our future,” said Farley. “I feel extraordinarily privileged to serve next to you who feel the same way.”