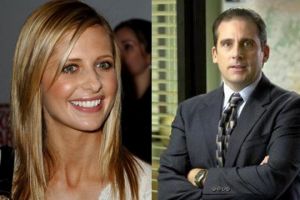 Most of this drama has circulated around the ninth season of “Two and a Half Men.”  Earlier this year, Charlie Sheen was fired by the producers of the show for his ‘hostile and self-destructive’ nature.  CBS was then put to the task of finding a replacement for Sheen’s character, Charlie Harper.  Several months later, Ashton Kutcher was announced as the newest edition to the cast.

So far the cast and crew have enjoyed working with Kutcher, but the fan’s reactions might be another story.  Already, several rumors have surfaced as to how Sheen’s character will go out.  However, the real question is will the show sink or swim without Charlie Sheen?  Find out Sept. 19 on CBS.

A new cast member also played an important part in another show as NBC’s “The Office” enters its eighth season.  Steve Carell, who played Dunder Mifflin’s regional manager Michael Scott left the show after his contract expired after the previous season.  During season seven’s finale, fans were given a taste as to who the new manager would be after several celebrities playing candidates were interviewed.  Fans rejoiced in July when it was confirmed that James Spader will join the cast as ultra-confident yet very creepy Robert California.  To find out if Spader’s character will make or break the show tune into “The Office” season eight September 22 on NBC at 9 p.m.

There are some early previews of new shows that are making waves with critics and audiences a like.  According to IMDb.com, “Terra Nova” and “Ringer” are at the top of the list for most anticipated shows for the fall season.  “Terra Nova” is about a family selected to travel back in time to the prehistoric era in order to save the human race.  (Think “Jurassic Park” with a little mix of “The Time Machine”).  It all begins Sept. 26, at 8 p.m. on Fox.

Ringer marks Sarah Michelle Gellar’s return to TV eight years after Buffy The Vampire Slayer ended.  Witnessing a mob hit, Bridget Kelly (Gellar) is placed into the witness protection program only to fear for her life from her government watcher.  Kelly flees and reunites with her twin sister, Siobhan (also played by Gellar).

Siobhan mysteriously disappears and Bridget ascends into her twin sister’s life.  However, Siobhan has some interesting secrets in her life.  Ringer premieres Sept. 13 at 9 p.m. on The CW.