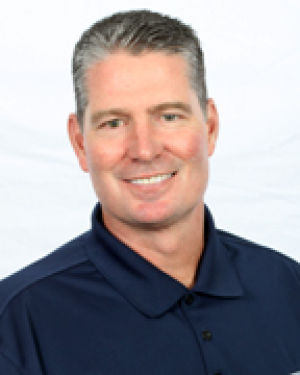 A new face has arrived for the Lady Blues basketball team on July 18 after the departure by last season’s assistant coach Toni Gross. That man is Jim Biggs.

Biggs brings more than 19 years of coaching experience from the Amateur Athletic Union or AAU, where most of his players went on to play college ball. Over the course of his involvement with AAU, 14 of those years he coached girls basketball.

In fact, Washburn currently has several athletes that were former basketball players on the teams he coached. Before coaching, Biggs played college ball at Emporia State from 1982-86, where he was a three-year starter for the Hornets.

During Biggs’ career at ESU, he was a three-time honorable mention all-CSIC pick scoring 1,002 points in 115 games. Currently, Biggs ranks No. 23 on the ESU scoring chart and No. 8 for career rebounds with 662.

After graduating from Emporia State with his Bachelor of Science in Business in 1989, Biggs attended Washbun Law from 1986-89 where he received his Juris Doctorate. Since then he practices law at Cavanaugh and Lemon, PA, in a counsel position. Outside of coaching and law, Biggs is a father with two daughters following in dad’s athletic footsteps.

“I think they are going to be really good and fun to watch,” said Biggs. “All the players need to make the commitment and set their minds to working hard in preseason and throughout the year. I’m hoping to be part of something special, which there is a good chance.”

Biggs has a message to the student body this year, challenging them to show up to every home game and be as loud as they can. As far as the schedule goes, there is no question which game Biggs is the most ready for: Emporia State at Emporia.

“The rivalry between Washburn and Emporia is great,” said Biggs. “I love going to the games and watching the students and how they get involved in the games.

White Auditorium is a great place to play regardless of whether you are playing for Washburn or Emporia.”

His whole life might have been split between the gold and the blue, but now it’s evident whose side Jim Biggs is on now.