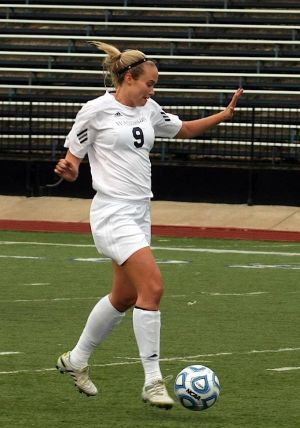 The Lady Blues went head to head against Fort Hays State University in soccer on Saturday, pulling out a victory in the last quarter with a score of two to zero.

The game got off to a slow start, with several goalpost ricochets and near misses in the first half, but no scores. The Lady Blues showed great stamina as they put forth powerful plays and a strong defense in a constant barrier against the Fort Hays determined offense, which continued all throughout the first half.

The pace quickened with the beginning of the second half, as the Fort Hays offense picked up their feet, forcing the Lady Blues defense to step up in order to keep pace with them. As the game wore on, both teams continued to run harder and faster, refusing to give in.

Within the first minutes of the last quarter, the Lady Blues gained the advantage as Caysie Beetley, sophomore midfielder, sent the ball sailing into the goal for the team’s first point.

It was after several more minutes of gameplay, that the Lady Blues scored another goal. The end of the game saw Washburn shutting Fort Hays out of the goal completely, pulling out a well-earned victory.

Coach Tim Collins said that two goals was very pleasing- and that after five losses, while it was hard to have confidence, he felt that the team had really showed a lot of it out on the field that evening, both in themselves and in each other.

“Something we talked about at half time is that you can’t play at a pace that is slower than what you’re capable of,” said Collins, “You have to work and get faster and quicker and better.”

Collins is confident that the Lady Blues did just that, and hopes to see that attitude continue.

Mallorie Monhollon, freshman goalkeeper, expressed satisfaction with the team’s defense and passing maneuvers during the match. The defense kept its game up really well the entire match, while there were very well connecting passes to the forwards that allowed them to really get a good advantage.