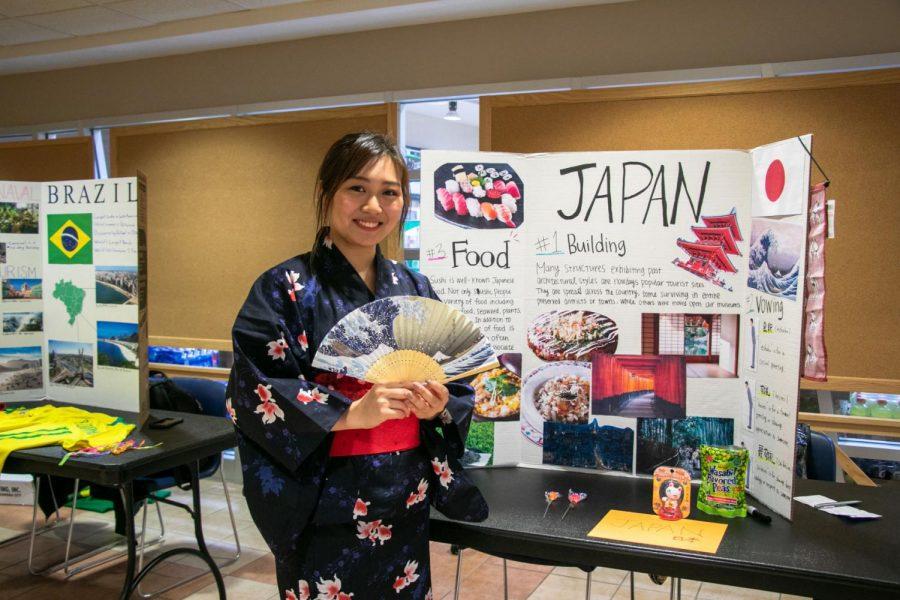 Kimono: Kasumi Sawaki, a junior business management major, is the president of the International Club. She wore a Kimono at the Japanese table.

The Washburn International Club held the 2019 Celebration of Cultures from 4 to 7 p.m. Nov. 20. at the Memorial Union. Students from over 20 countries and many student organizations presented at the event.

As people walked through the Union, they could experience the culture and learn a few phrases of other languages around the world in person.

“The information we want to share with other people is the beauty of differences,” said Zhang. “It’s interesting to see many different cultures gathered together. This event also helps students to open up their eyes to see the world in a different perspective.”

At the table, people could have hands-on experience of calligraphy, using a special type of writing brush. Some people learned some simple words, and some people tried the traditional Chinese painting.

Sangyoub Park, sociology professor, helped with the Korean table. He designed a game to use chopsticks to pick up rice, which introduces the food utensils in Korea. Korea is the only country where people use metal chopsticks, which are flat and heavy, while other countries use wooden chopsticks.

“I asked them to pick up rice, some people did,” said Park. “It’s actually much more difficult than you would want.”

Park also brought Jegichagi, which is a Korean hacky sack. People tried to kick with their feet in a group and had a lot of fun.

Deanna Toenjes is a recent alumnus, history and English major. She stopped by all the tables to see what was presented and tried the food. Toenjes had the experience to study abroad in Tokyo and teach English in Korea for seven months.

“I think it’s really neat to come and get to talk with people about their home countries, and learn things that you might not learn,” said Toenjes. “It makes me want to visit more places to see the world myself.”

Madeline Lysaught, a sophomore international business major. She stopped by the Indian table. They talked about the differences of hotels when traveling in India.

“This is a great opportunity to learn more about culture through one on one conversation with someone from that country,” said Lysaught. “I heard some things from her, that I probably wouldn’t have heard online.”

The Celebration of Cultures let people experience something different from everyday life in the U.S. It’s not only a chance to learn about culture from other countries, it’s also a way to share the local culture and life experience with international students and make personal connections.