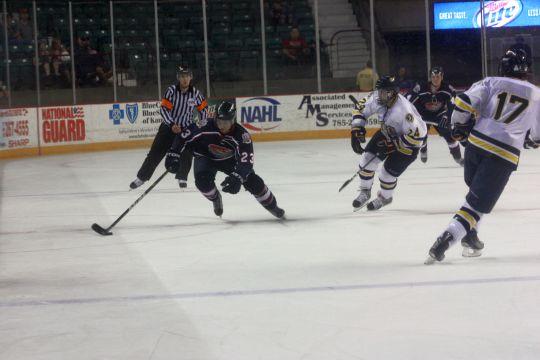 Stick it out Forward Shigenobu Kakudate races down the ice towards the Central Oklahoma Broncho goal on Saturday night. Kakudate had two assists in Topeka's 4-0 victory.

The Topeka RoadRunners were able to show off some of their young talent Saturday night.

Aided by a 44-13 shots on goal advantage, Topeka started their preseason in successful fashion defeating the University of Central Oklahoma Bronchos 4-0 at Landon Arena.

Eighteen new players suited up for the RoadRunners, with Mason Miller, Kevin Novakovich and Joe Van Antwerp playing as the only returners. Van Antwerp registered an assist but the remainder of the scoring in the contest came from new players.

“We’re still in the process of putting it all together,” said Scott Langer, Topeka head coach. “It was nice to see some things start working for us and the new guys starting to grasp some of those concepts.”

At 2:26 of the first period, forward Grant Garvin knocked home a rebound to put Topeka up 1-0. He said it was good to get the experience of playing in Topeka.

“The fans were great and it was a great atmosphere,” said Garvin. “I love it here.”

Forward Scott Moyer put Topeka up 2-0 at 8:22 when he took a pass from defenseman Johnny Roisum. Through the first period, the RoadRunners outshot the Bronchos 15-6.

Topeka’s final goal came at 6:28 of the third period from forward Jake Kamrass, the only player under 18 to play on Saturday. Shigenobu Kakudate, of Tokyo, registered the assist on the goal and was the only player to have more than one point on the night, also registering an assist on Garvin’s goal.

With balanced gameplay, Langer acknowledged the difficulty he’ll have in cutting four players from his current 29-man roster before the regular season.

“A lot of the guys are fighting for their life and a lot of them didn’t make decisions very easy for us,” said Langer.

The team also had two unexpected additions to their preseason roster recently. Forward Brian Christie and defenseman Cory Ramsey, who both played pivotal roles in Topeka’s success last season, decided to return to Topeka for this season.

“It’s certainly nice to get a phone call and they say ‘Hey, I want to come be a RoadRunner,” said Langer. “Those are two high-end hockey players that we really didn’t think we were going to have back. Some of these guys we brought in were to fill some of those holes, so it’s making decisions even tougher. But those two guys are our big-time leaders.”