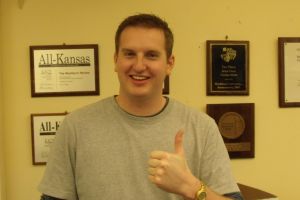 Joseph Scherr is a sophomore criminal justice major with an emphasis in law enforcement and a minor in sociology.  He was born in Lincoln Nebraska, so yes he is a Husker fan.  He enjoys class rock music and often loves to share a good joke.  Some people say he looks like Brad Pitt, but he just say’s Brad Pitt tries to look like him.  Contact him at [email protected]