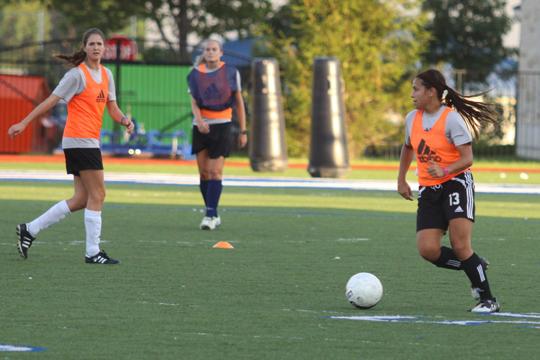 Kicking into gear The Lady Blues scrimmage prior to the beginning of the season. The team has started out slow losing four out of its first five games.

With the new season starting up for Washburn Women’s Soccer, it’s time to look forward to the things ahead and take a look at the season left behind.

“It was a good season- it had its ups and downs,” said Kelsey Raiman, a senior center right defender. “We didn’t do as well as we have in the past…but I think overall it was a pretty good season.”

Raiman recalled a game played well on the offense side, in which the Lady Blues played most of the game down by a goal, then scored two consecutive goals within the last few minutes of the game, pulling ahead and earning a victory. She mentioned that she didn’t think the season was difficult because the team was not playing at their best, rather because both they and their opponents consistently brought everything they had to the field- it was just a matter of outlasting each other, and sometimes they didn’t last as long as the opponent.

“I think that some of our toughest games last year were against Omaha and Central Missouri,” said Collins.

While the team played well, during the season there were also developments in the way of injuries.

“We had a lot of injuries last year, more than almost any season in the history of the program. There even reached a point where several people would have to sit out of practice.” said Collins.

“I think we had about four or five people that were sitting out of practice, and just playing in games,” said Raiman. “There were a lot of injuries.”

The Lady Blues have set a few goals for this season as a team. One of their big ones, according to Collins, was to make the conference tournament. Raiman said her personal goals were to shoot for some shut-out games and score some goals this season- something she doesn’t have much opportunity to do as a defensive player.

The Lady Blues’ overall record for last season was five wins, nine losses and four ties. They are keeping a positive outlook for this year and planning to play hard.