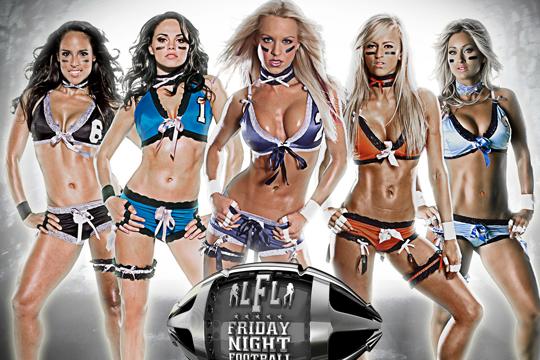 Taking it seriously Players in the Lingerie Football League play more than just powder puff games. The young women take their games as seriously as any other athlete.

At first glance, most sports fans scoff at the Lingerie Football League and write it off as a gimmick, but those who delve a bit deeper can see that it is much more than scantily-clad women giggling while playing a lighthearted game of two-hand touch.

The LFL started out as “The Lingerie Bowl,” a single event played at halftime of the Super Bowl on pay-per-view. Back in 2009, the LFL was established and began playing a regular season schedule with 10 teams.

Now in its third season, the league has expanded to 12 teams and usually plays one game each week with all games being broadcast on MTV2. The 20-week season culminates in the Lingerie Bowl that still takes place on Super Bowl Sunday.

Since its inception, the LFL has drawn criticism from organizations and individuals who think that the LFL demeans and objectifies women. It’s undeniable that the league is using sex as one of its major selling points, but don’t all professional sports leagues objectify their athlete’s in one way or another?

Look at fantasy sports. millions of people run fantasy teams where success is practically measured by their ability to objectify professional athletes. Players are traded back and forth faster than a public library copy of “Breaking Dawn (The Twilight Saga)” the month after it’s released.

Heck, baseball cards printed with the likeness of athletes have been around for about a century and are passed around with all the fanfare of a Twinkie in a grade school lunchroom.

It’s easier for me to see how some could think the league is demeaning to women, but I would guess that the women playing in the league don’t feel that way.

In an interview on “8th Man Radio,” a webcast dedicated to LFL, one player spoke out on why she wanted to play.

“I decided to join the LFL because I wanted people to understand it’s more than the name,” said Liz Gorman, wide receiver/safety for the Tampa Breeze. “We can be beautiful and intelligent but still hit you like Ray Lewis.”

I realized just how tough these women are. They play all-out, jaw crushing, concussion inducing, full-contact football. You see intensity in their eyes as they play football with enough ferocity and passion to rival any male league.

I would even argue that they are tougher than most NFL players because not only are they tough, but they have to be tough while wearing lingerie. Just try to name one NFL player who would have the guts to do that…. I rest my case.