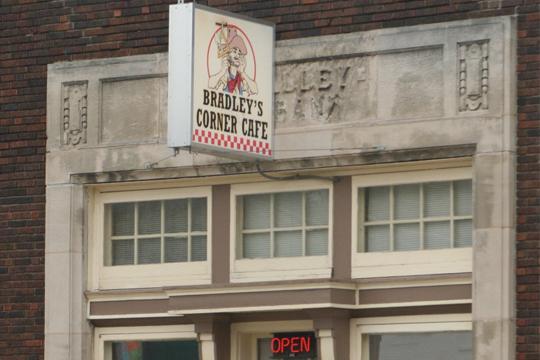 North Topeka Arts District Bradley’s Corner Cafe hosts a variety of art in scenic North Topeka. It is just one of many places in NOTO where art is prevalent.

Despite art budget cuts around the state of Kansas this past year, the North Topeka Arts District, also known as NOTO Arts District, continues to inspire students and produce new projects ahead of time.

With a recent $100,000 gift, renovations, student projects and gallery collaborations, Anita Wolgast, the art district’s current marketing coordinator and co-chair of the project, and John Hunter, Washburn theatre professor and co-chair of the project, are especially confident in what the district has to offer to students of all ages this upcoming year.

As the largest urban development since Topeka added the West Ridge Mall in 1988, the NOTO Arts District has plenty of history behind it.

“This project is huge,” said Hunter. “It’s not just about the two and a half streets that make up the historic North Topeka. It’s about the Great Overland Station and the first riverfront park that’s going in—it’s incredibly multifaceted.”

On Sept. 2, the NOTO Arts District received a significant combined gift of $100,000 from the Kaw Valley Bank and the Redbud Foundation.

“This gift has truly helped the NOTO project turn a corner,” said Wolgast. “It has allowed us to enter phase two far ahead of schedule.”

Phase two will allow the NOTO Arts District to have national marketing, which will attract more regional and national artists.

“It will also provide moving costs to those who qualify, which will allow further incentive money for the qualifying new artists and will help towards renovation costs for the buildings,” said Wolgast.

“It was absolutely fabulous to receive such a gift,” said Hunter. “We thought that it would take three years when we first started to end phase one but NOTO took off so quickly that, quite frankly, we blew by it at the end of  18 months. ”

Timing and money is always a problem when working on a restoration project.

“So, this last summer, we were developing phase two, which would be to really kick it up a notch,” said Hunter. “Receiving the $100,000 gift worked beautifully for us.”

One of the important aspects of the NOTO Art District, according to Hunter, is its preservation roles.

The city of Topeka was only 10 years old when the whole development of the city was starting where the NOTO Arts District building is currently standing.

The NOTO Arts District is a project that began under the production of the Heartland Visioning process, which formed in 2008.

“Over 600 people attended the community meetings in June 2008 to provide input into what would create a vibrant community,” said Wolgast. “During those discussions, one of the strategies that became a part of the Quality of Life Foundation was to establish an arts district in Topeka.

Like most community-based projects, a year was spent researching art development in multiple places around the country.

“Taking that plan to people in our community was a large part of that research,” said Wolgast. “What we received as input was nothing but excitement and support, the people want us to move forward with our plans.”

A collaboration between Topeka Public Schools, Washburn’s Mulvane Art Museum, and the NOTO Arts District, according to Wolgast, made it possible to renovate a building and open the NOTO Arts Center where art-focused classes are being offered for persons of all ages.

“Dr. Farley has provided tremendous leadership and I can’t say enough for Cindi Morrison [director of the Mulvane Art Museum] and all the work, in terms of advising, she has provided.”

When looking to the NOTO Arts District, the community can tell just what the project has planned.

“We look to artists,” said Hunter. “We’re giving them the opportunity to become teachers as well. We’re also embracing anyone in Topeka who wants to do art educational teaching, in a variety of ways: kindergarten teaching, grade school, and high school.”

At this current point and time, the North Topeka Art District has two artist studios and galleries.

“The first person to open in NOTO was Barbara Waterman Peters with Studio 831,” said Wolgast.

Peters actually leases the space to several artists to present and feature a gallery of their own work.

“The second artist to open in NOTO was Renee Johnson with the Elective Gallery and Studio,” said Wolgast. “She, too, subleases to several artists.”

In less than a year, the NOTO Art District has had around 12 artists represented in the galleries.

Parts of the NOTO Arts District didn’t start on their own, though.

“A collaboration between the Topeka Public schools, Washburn’s Mulvane Art Museum, and the NOTO Arts district made it possibly to renovate a building and opening the NOTO Community Arts Center,” said Wolgast. “This is where art-focused classes are being offered to people of all ages.”

The renovation of the space in the NOTO Arts District has been a project for Washburn University Tech students, working alongside professionals.

“The have been our shining stars,” said Wolgast. “Their contribution of work has saved the project a significant amount of money, while at the same time it has provided the students on-the-job training in an historic project for our community.”

With one Washburn student already interested in developing a major public art project in the NOTO Arts District, this is indeed an exciting time for the arts in Topeka. Not only do Washburn students have multiple opportunities to get involved, but community members are encouraged to as well. “Anyone can become involved by volunteering to serve on planning committees,” said Wolgast. “They can also can become involved as artist looking for shared studio space, as potential business opportunities for after graduation and as a very fun place to spend time on the First Friday Art Walks.” Live music will be provided along with refreshments—a guaranteed good time to students has always brought hundreds of people each month.