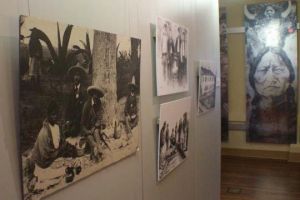 Every community has its heritage to celebrate. With Topeka, the tapestry of the capitol city is synonymous with the Hispanic-American community. A small sliver of this heritage is on display at the Brown v. Board of Education National Historic Site downtown.

From Mexico to America: Through the eyes of Kansas artists is a special exhibit on display inside one of the rooms of the site. The art displayed inside are representation of the struggle and personal history of one artist, while the other artist used his skills to highlight some of the leaders of the Mexican-American struggle for equality.

Andy Valdivia is an artist who grew up in Topeka. His mural, titled “HIStory,” depicts all the different aspects of life growing up in the capitol city. From depictions of grandparents that made the trip from Mexico to his brother’s service in Vietnam, Valdivia’s mural is a snapshot of the Hispanic-American experience in the United States.

“One of the things that the Park Service prides itself on is working to showcase the local culture,” said Dave Schafer, Brown v. Board of Education National Historic Site, chief of interpretation and education. “The Hispanic-American experience is one that fits well here with their story of struggle for equality.”

Joey Rocha, also of Topeka, has a mural, as well, that holds up the life of such seminal Hispanic-American leaders as César Chavez as examples of the plight of Hispanic-Americans in their attempts to interweave themselves into cultural tapestry of American history.

“Many people have come here and notice that there is so much that relates to them so well,” said Schafer. “Everyone usually notices some of the landmarks of Topeka and some of the early Hispanic-American leaders that are depicted in his work.”

While the artwork is the centerpiece of the exhibit, some photos of Valdivia’s family from early on in his life are also on display. The photos give site-goers a view of the family that helped to nurture his talents while living in Topeka.

The site administrators also are working with the artists to allow members of the community to take a piece of the exhibit with them.

“Some of these pieces are going to be available for purchase soon,” said Schafer. “We’ll sell it through our gift shop, which is a non-profit portion of our site.”

The exhibit is open to the public and can be viewed during normal business hours 9 a.m. to 5 p.m. It will be on display until Nov. 30.