Beetley plays through pain on the soccer field 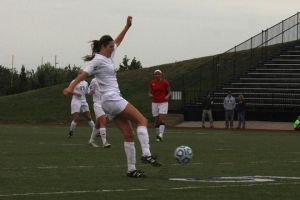 In between injuries, 6 a.m. practices and schoolwork, a soccer player has to be constantly moving. Washburn University sophomore forward Caysie Beetley understands this.

“I’ve been in soccer since the very beginning,” said Beetley. “It’s busy, aggressive, stressful and enjoyable. I absolutely love it.”

Beetley, who has a love for the sport, has been playing since she was 12 years old.

“I attended grade school at Point Dume Elementary School in Malibu, Calif.,” said Beetley. “That’s where I transitioned from playing tennis to soccer for the first time.”

According to Beetley, tennis just wasn’t the right sport for her because all of her friends were playing soccer.

“I just wanted to be involved with other people, not training alone, and soccer was what I fell in love with,” said Beetley.

Later, Beetley attended Malibu High School, where she started on the varsity team as a freshman and continued to start on varsity all the way through her senior year.

“It was a really great experience,” said Beetley. “I then played for a year-round club team with some of the same girls.”

While most of the players at Washburn were recruited, Beetley was not. Beetley was originally planning on attending the University of Arizona at the end of her senior year.

“It was one of those sad moments that hit me hard,” said Beetley. “It made me realize that I wouldn’t be playing soccer again.”

With an expected turn of events, Beetley’s mother, who is from Topeka, set up a try out at Washburn with head coach Tim Collins.

“He made me feel very welcome during my tryout with him,” said Beetley. “In the end, I just signed the papers and it was a done deal.”

During her freshman year and first season playing with the Washburn Lady Blues, Beetley started eight of her nine games.

As a sophomore starting forward, Beetley came to respect that decision while being on the injured list.

“I had severe abdominal pains,” said Beetley. “After a [CT] scan, the cause of those pains has yet to be determined.”

According to Beetley, being injured is a lot more frustrating than what can be imagined.

“I wish I could be out there contributing,” said Beetley. “At the same time, I have really appreciated the chance to see my teammates from a different perspective. I’ve got an extra opportunity to get to know them better and respect them even more.”

Beetley personally believes that everything just fell together.

“All of the friends I’ve made here at Washburn have made being on the team such a great experience for me,” said Beetley. “We’ve been together since the beginning and that’s a great bond to have, a constant support on and off the field.”