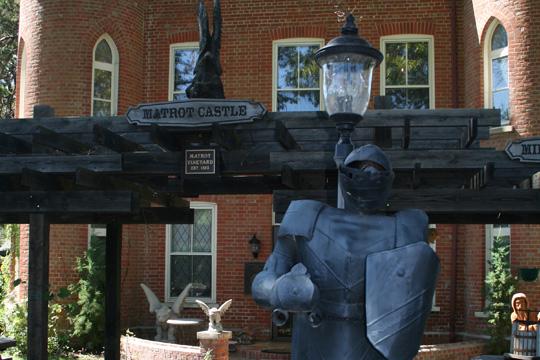 Matrot Winery Finding a home in a brick castle at 6424 S.W. Huntoon St., Matrot Winery has a storied history dating back to 1883, when it was used for bootlegging during prohibition. Matrot has been recognized for its wines.

With the autumn weather starting to nestle in, nothing goes better with the brisk days filled with wool sweaters and falling leaves than a cup of fresh coffee, a steaming latte or a glass of fine wine.

Whether you like the dropping temperatures or not, you cannot choose the weather; but what you can choose is what kind of beverage can go with it. Whether you’re a ready-to-go coffee person, a cultured wine connoisseur or an easy-going beer drinker, there are numerous places where you can enjoy a beverage that was brewed right here in Topeka.

Whether you’re an investment banker on the way to the firm or a student trying to make it to calculus on time, coffee is a good morning fuel to get ready for the long day ahead, and PT’s Coffee Roasting Co. brews four different varieties of it daily. PT’s serves Topeka at their retail location in Barrington Village at 5660 S.W. 29th St., and also nationwide in restaurants and cafés, including Washburn University’s own Study Grounds Café in Mabee Library.

First starting as a small coffee shop in Topeka in 1993, PT’s owners Jeff Taylor and Fred Polzin were so enthusiastic about coffee that it led them to begin brewing their own in 1997. Since then, PT’s received much recognition and notoriety for its outstanding locally-brewed coffee, including the prized “Roaster of the Year” award given by Roast Magazine in 2009.

“PT’s is one of three coffee companies in the world revolutionizing the industry and roasting delicious coffees,” said Bret Arnold, senior sociology major at Washburn and one time employee of PT’s.

Arnold said PT’s and two other major coffee companies, Intelligentsia and Stumptown, created what is called “direct trade,” a type of fair trade among coffee roasters.

“PT’s works directly with a small farm, cutting out the middleman,” said Arnold, in reference to direct trade, “As a business, PTs gets direct control over their product—a beautiful thing when we are discussing a quality-driven commodity in the specialty foods market.”

This way, PT’s Coffee Roasting Co. not only serves coffee all over the nation, but also helps out the community and local farmers.

But if coffee isn’t your drink of choice, there are two local wineries that produce and sell 100 percent Kansas made wine: Matrot Winery in Topeka and Renaissance Cellar’s Winery of St. Marys, Kan.

Matrot Winery operates in a brick castle located at 6424 S.W. Huntoon St., on the western end of Topeka. This location serves as an outlet for their winery in Eudora, Kan., named Davenport Winery, which has had grape vines since 1992 and been commercially licensed since 1997. Matrot Castle has been serving as an outlet for two-and-a-half years, but has been standing in Topeka since 1883, when it was used for underground winemaking during the prohibition days.

Matrot, like PT’s, has received recognition and awards for its beverage. Josh Bryant, assistant winemaker at Matrot Castle, says that they offer around 10 to 20 wines at any given time and try to have different types year round. The wines include varieties of red (sweet or dry), white and blush wines.

“If you want to try some for yourself, Matrot Castle offers free wine tastings every Saturday from 11 a.m. to 7 p.m., and makes for a really fun experience,” said Bryant.

Both Matrot Castle and Davenport Winery in Eudora provide picnic tables outside the buildings, making a splendid spot for fall picnics, perfect for cozy dates and afternoon getaways.

Renaissance Cellar’s Winery is located in St. Marys, Kan. and has been making wine since Oct. 29, 2010, when it first opened. Like Matrot, Renaissance Cellar’s wine is made with 100 percent Kansan products. Eric Stevenson, winemaker at Renaissance Cellar’s, said they have started vineyards at the winery, but it will be a few years before they can be harvested. He said that they buy grapes from local farmers, crush and press them, let them ferment, then utilize a process called maceration, which is leaving the grapes on the skins for a period of time following the fermentation.

“If you don’t see it in your liquor store, be sure to ask the owner, and they will be able to stock it,” said Stevenson,

Fat Friar’s Honey Mead is also on tap at Frances O’Dooley’s Irish Pub & Grille in Topeka and is also featured in many of the pub’s special drinks.

To brew beverages at home, Kramer’s Ale-n-Vino, Inc. is a store at 925 N. Kansas Ave. that provides home brewing kits and supplies to make your very own beer or wine. PT’s also sells supplies and machinery for brewing PT’s coffee yourself at home.

Whatever the choice may be, Topeka’s breweries and wineries have years of passion and experience behind them, support local farmers, and bring smiles to the community with their authentic and delectable beverages.