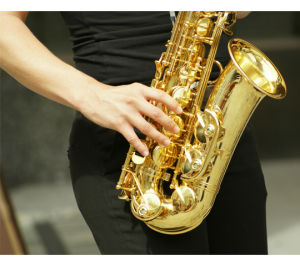 Last Thursday, the Washburn University Music Department presented “An Evening of Jazz” to the public.  The program featured Jazz Ensembles I & II and Jazz Combo I all under the direction of Craig Treinen.  The WU Jazz Ensemble II crew was up first, and they did not disappoint.  Their opening of Alamode dazzled audience members with solos by Taylor Dunham on trumpet, trombonist Danielle Brown, Evan Coleman on tenor saxophone and Daniel McCready on guitar.

Next was the sultry and casual Early Afternoon Blues led by the saxophone playing of Coleman and Amanda Kathrens.  Jordan Ward also contributed to the composition with her slick piano playing.  To conclude the night for Jazz Ensemble II was Duke Ellington’s Cotton Trail.  The song was very brass-heavy, including solos by trumpeter Caitlyn Priddy and trombonist Andrew Anderson.

The WU Jazz Combo I entered the stage playing the funky and buoyant Lucky Southern.  The group was comprised of tenor sax Casey Artzer, trombonist Easton Bell, Nusret Ozakinci with Bass, Sawyer Treinen on guitar and Lucas Whippo on the drums.  The quintet was followed with “Every Time We Say Goodbye”, a bluesy and soulful song about bidding ado to the one we love the most.  Taryn Doty added resonance to the song with her sultry vocals.  During the song “All of Me”, everyone in the group complimented each other and begged to ask the question: “Will  you not take all of me?”

Last, but not least, was the WU Jazz Ensemble I.  The opening number, “Gingerbread Boy”, began with a bang and shook the room with its dramatic intensity.  Much of the high-energy could be atoned for the brass section.  It was like one big thrill ride that as quickly as it started, it was over. To allow for the viewers to catch its breath, the Ensemble followed up with Miles Davis’ “Boblicity”, a composition very laid-back and cool.  It makes sense as the song was off of Davis’ Birth of the Cool album. The masterpiece maintained a low-level of intensity throughout.  Michelle Flanagan made sure of this, keeping the song on the low with her piano playing.

“Only You” by the legendary Count Bassie was next as Doty returned on vocals.  The song deals with someone professing their love for the only person that they feel is right for them.  The band accompanied her in an over-dramatic fashion.  Another Bassie arranged song emerged as the band fired through Deedles Blues.  A call and response was present as Doty commanded her baby to “Come Back!”  The ensemble would respond with an uproarious and flashy response.

The WU Jazz Ensemble I concluded the show with “Gaining On You”, a fast paced and sizzling composition that got heads nodding. Treinen joked during the introduction that Andy Rhodes would wear the finish off of his brand new bari-saxophone.  Rhodes did just that, leaving a few chunks left behind.  The band continued with ferocious momentum and ended with a sonic-boom.