New Inhabitants ‘Shot Across the Bow’ worth taking a listen 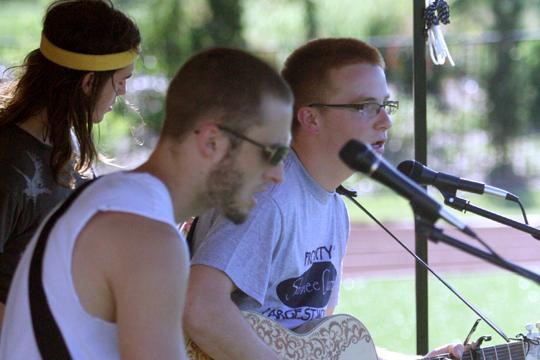 The New Inhabitants, an indie-pop band based in Lawrence, just released its debut album, “Shot Across the Bow” on Sept. 10.

Washburn students and Topeka residents may know the band from its many gigs in Topeka and Lawrence, notably at last year’s Shawnee County’s Largest Workout at Yager Stadium. The band consists of Topeka natives Tyler Jenkins and Zach Johnson on guitar and vocals, Adam Norris is on piano and backup vocals, Daniel Webb on bass guitar and Joshua Frisch on drums. Johnson, a new addition to The New Inhabitants, originally played in the band Yard Art Project, a Topeka-based band which opened for Eddie Money in Oct. 2006 at the Burnin’ Downtown Street Festival.

The album begins with “Second Thoughts,” an upbeat song driven by a somewhat distorted guitar rhythm. In the verses, the guitar cuts out and is replaced by a cool piano melody as Jenkins’ lines cut in. For the chorus, the heavy guitar comes back with more volume from the drums, as well. The song ends with what sounds like an accordion playing along with the music.

“Moving Boxes” is a somewhat different style than I’m used to hearing from TNI. It starts with heavy effects on the vocals and guitar, and it’s definitely one of my favorite songs on the album because it’s just so different. It sounds like it also includes bongos or some sort of tribal drum later in the song. It continues to build throughout the song that continues with a heavy guitar solo before going almost silent and fading out.

“Such Great Heights,” is another song you’ve probably heard at the band’s live performance. It has a repetitive three-note rhythm by the piano, similar to “Sunburn,” and is very light-hearted. It has pretty decent lyrics, and with the background singers, it has an almost Beatles feel to it.

“Get You Wrong” begins with a drum beat that reminds me of a faster version of Echo Lake’s song, “Summer Grove.”

There are definitely differences between the two beats, but I found it funny since Jenkins and Johnson went to high school with the founding members of Echo Lake, Scott Stormann and Matt Mirsch. This is another one of my favorite songs from the album. The rhythm guitar in many of TNI’s songs reminds me of Rod Stewart’s rhythm guitarist.

Track No. 8, “Leave You,” is another slow, acoustically-driven song that stands out on the album. The piano is much less repetitive in this song than in “Sunburn” or “Such Great Heights,” which I enjoyed. The band is so strong on its slower songs and they always seem to have parts to break up the monotony of the same chords being played throughout the song. This song includes a terrific piano solo and a bridge.

“Washed Away,” which made its radio debut Oct. 11, goes back to the TNI-style of a high-pitched, repetitive piano hook in the beginning, but then switches it up in the chorus. I’d like to hear more bass, but for TNI’s upbeat and up-tempo style, it makes sense not to have a heavy bass.

The final song, “Alone,” begins with a cool piano riff, which cuts off to leave just the bass and drums playing during the first verse. I love it when songs take a break from all the other instruments and just let the bass and drums hammer down, so thumbs up for this song.

This album, which is available on iTunes, is definitely worth taking a listen to if you like upbeat music driven by piano and acoustic guitar.

You can check the band out live tonight at 7 at Abe & Jake’s Landing in Lawrence as it opens for Parachute, or check them out online at www.newinhabitants.com.