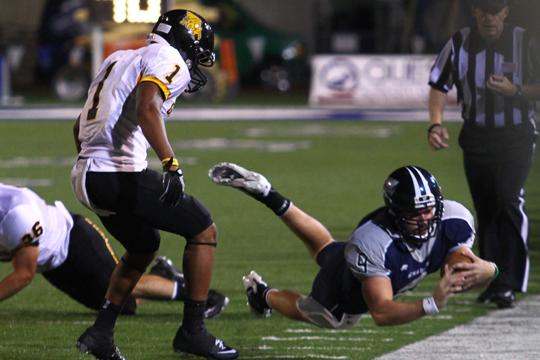 Ichabods Rolling Dane Simoneau dives for a gain in Washburn’s last home game. The Ichabods went on the road for a win last weekend 42-14.

Another team fell victim Saturday to the momentum of the Washburn Ichabods as they toppled the Truman State University Bulldogs, 42-14.

The Ichabods are now 6-0 for the first time since 1946, making head coach Craig Schurig the winningest coach in Washburn University history.  The Washburn Ichabods are currently sitting at the No. 5 position in the nation on the American Football Coach Association top 25 poll.

“It feels good for a team in the middle of  the season,” said Schurig.  “You‘re really just focused on one game at a time.  We feel like we’ve played well and earned the wins that we’ve had.  We feel like we could play better, but really you just try to focus on the next opponent, and try to get better for that next opponent.”

Washburn’s defense was the first to take the field as they held the Bulldogs to just 20 yards of total offense in the first drive and had a sack by senior defensive end Dakota Palan-Johnson. Thanks to solid rushes and big pass completions, the Ichabod offense scored the first rushing touchdown of the game on a five-yard carry by senior running back Justin Cooper.  Truman State’s following drive once again end in a punt after a joint sack by sophomore defensive end Adebayo Oladapo and junior defensive lineman Jayveri Kelly.  The Ichabods tacked more points on to their lead after a four-yard touchdown reception by senior fullback Greg Schoenberg.  TSU’s drive would be cut short by yet another joint sack this time by freshmen offensive lineman, Bryan Dale and Oladapo shutting out the Bulldogs in the first quarter, 14-0.

Before officially getting settled into the second quarter the Ichabods received their third touchdown of the night by Washburn sophomore wide receiver, Ronnell Garner for 72 yards. WU’s second drive, after a quarter of big Toré Hurst receptions, set up the Ichabod’s fourth touchdown as Washburn senior running back Justin Cooper put the Bods up 28-0. The sputtering Bulldog offense strove to start a spark that would ultimately remain unlit.

The Ichabods had to utilize their punting unit after a 10 yard sack on Washburn senior quarterback Dane Simoneau by Truman State sophomore defensive end Matthew Smith. The Bulldog offense returned in pursuit of a score only to be disappointed by a sack for a  seven yard loss by Kelly, followed by an interception by Washburn freshman full safety Calvin Kenney. Kenney’s pick placed the Ichabods at the 30-yard line in Bulldog territory.

Unable to break into the end zone, the WU offense called upon Washburn junior kicker Jeremy Linn who failed to connecton a field goal from the 33-yard line. The next two drives left both teams empty handed until the final 40 seconds of the half where TSU saw their first score even after a six yard sack by Palan-Johnson.

Time spent in the locker room seemed to only heighten the dynamics of the WU offense as they came out full speed on their first drive. In the first minute of the third quarter, Washburn senior quarterback Dane Simoneau hooked up with Washburn senior fullback Greg Schoenberg for a 36 yard touchdown reception, extending the Ichabod’s lead to 35-7.

Midway through the third, TSU acquired its second score by sophomore wide receiver Dallas Grier, for an 18 yard reception. The third quarter ended with bouts of punting and yet another sack on Truman State senior quarterback J.B. Clark, by Washburn senior linebacker Marty Pfannenstiel.

The fourth quarter opened with a sack by Palan-Johnson, his third of the night. The final score of the game would be a 73 yard run touchdown by Cooper. Cooper had 19 carries for 168 yards with three touchdowns, which earned him the title of MIAA Athlete of the Week.

Washburn’s offense came away with points in each quarter of Saturday’s game, racking up 553 total yards. Simoneau went 17-for-29 for 275 yards with three touchdowns and no interceptions. Garner had three catches for 139 yards and one touchdown. Hurst had four catches for 86 yards and Schoenberg had two receptions for 40 yards accompanied by two TD’s.

Another teammate of Cooper’s is also adorning the recognition of MIAA Athlete of the Week. The Ichabod defense’s powerful performance set a school record with nine sacks in a single game.

The three that came from Palan-Johnson totaled 18 yards and earned him the MIAA accolade.

“I was able to watch a lot of film last week, and it gave away tendencies of the tackles and basically the O-line,” said Palan-Johnson. “What happened is that after awhile of doing certain moves, you trick them into thinking you’re going to do something else, and they do what you want them to do. You manipulate the O-line to have it your way, so I ended up getting sacks. Our defense was well prepared.”

Washburn’s battle to stay on top continues this Saturday at 1 p.m. at Yager Stadium with the Ichabods facing the University of Central Oklahoma Bronchos.