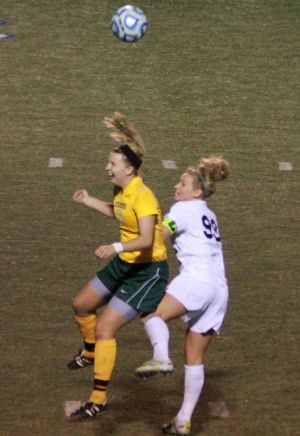 Time is a heavy burden to a college student. Whether it be the time period required to turn in a homework assignment, the stressful moments before a date, or the hours ticking away until graduation—with every good beginning comes an even greater end. Senior soccer captain, Lauren Henry, is steadily watching her final year of college fly by as her final season on the soccer team comes to an end.

The years seem to have flown by according to Henry whose carrier in soccer has been a long and successful one.

“I first began playing soccer in kindergarten,” said Henry. “I was only four years old.”

Henry first played on a parks and recreation team in Manhattan, Kan. She would drive to Manhattan from her hometown, Randolph, Kan, because her school didn’t offer a soccer team.

“I played on that team for a couple of years,” said Henry. “That’s where I fell in love with soccer.”

As an eighth grader in an even more competitive league, Henry began playing on a team with boys.

“It definitely makes you a lot faster,” said Henry.

When playing in the boys’ league, every aspect of the sport changed for Henry.

“I had to become more aggressive and train harder,” said Henry. “It really helped me in the end when I played with a few different boys teams.”

In high school, Henry didn’t have a soccer team. So, while the girls in her class were playing their sport, she was playing soccer on a boys club team. Henry also competed in The Olympic Development Program, which is league soccer, state soccer and national team soccer.

“That’s where I was first recruited,” said Henry.

As a junior attending Blue Valley High School, Henry was planning to go to college in Nebraska, but soon tore her lateral collateral ligament in her knee. Being injured changed a few aspects in finding a college for Henry, and she decided to look into University of Kansas  instead.

“That’s where coach Collins found me,” said Henry. “He really sold Washburn to me.”

According to Henry, multiple aspects in choosing a college changed after meeting Collins.

“It wasn’t a hard decision for me at all in the end,” said Henry.

“She’s set a pretty high bar to being a good human being,” said Collins,  “as well as a good teammate to the rest of the girls.”

During her freshman and sophomore year, Henry played on both the Lady Blues’ soccer team and basketball team.

“I would miss the first exhibition games in basketball while playing soccer,” said Henry. “I didn’t play last year though because of a broken ankle.”

Now, as a Washburn University senior, Henry’s final college season of soccer has been a tough one. Henry was injured in the beginning of the current season with cracked ribs.

“You don’t realize how much you actually use your core until you break a rib,” said Henry.

According to Collins, Henry’s pride helped her towards healing.

“She’s really come back and given 100 percent,” said Collins. “I think that she’s always had a great mindset for the game; a great soccer I.Q.”

Collin’s pride in Henry is evident.

“I’m going to be especially sad to see her go,” said Collins.

Currently, Henry has had 23 shots, 11 shots on goal and 31 corners this season.

Henry’s current title of senior captain is teaching her more this season than she originally thought it would.

“I’ve had to carry a lot more responsibility in bringing the girls together,” said Henry. “We’re a family on and off the field.”

Having a rough season has taken a toll on the girls, but Henry said it has given the opportunity to encourage each other even more.

“We’ll always stick by each other,” said Henry. “We’re here, we’re family and that’s what we pride ourselves in as Washburn University athletes.