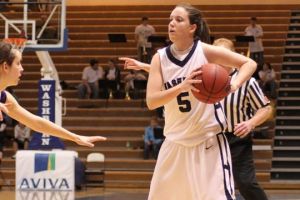 An athlete can spend their entire lifetime building a legacy for the following generations to come. But how long can the new generation hold onto that legacy?

The Washburn Lady Blues basketball team will take on that question this season after being the number one in the MIAA preseason poll on Tuesday Oct. 25.

Head coach Ron McHenry was pleased with the poll results, but at the same time, he believes that his team has a long way to go to earn it.

“I think that it’s always nice that our players are recognized,” said McHenry. “But it’s not a title for us.”

According to McHenry, the Lady Blues will earn the number one title with their time on the basketball court.

“We’ve earned it by paper voting only,” said McHenry, “We now have to work on earning it by the end of the season with a lot of hard work and determination.”

McHenry believes that with his senior players and their teammates, the girls’ ambition will help them in earning the ranking.

“We have two senior conference players on the team,” said McHenry.

Senior Stevi Schultz was on the first team and senior Cassie Lombardino was on the second team.

“With those kids coming back, it was probably one of the reasons we were chosen for the number one ranking,” said McHenry. “With the seniors and their teammates, we have a great team.”

The women’s basketball program has won a lot in the past according to McHenry. “I’m sure our current four seniors want to continue their legacy and make their last year a great year all around,” said McHenry. “That will never change with these girls; they’re strong leaders.”

With the season set to begin, McHenry and the Lady Blues have a long way to go in defending their ranking.

“You’ve got to tell them that the number one ranking does nothing to them,” said McHenry. “Most of our players want to be the team to beat, they strive hard for it—now, we just have to put it all together.”