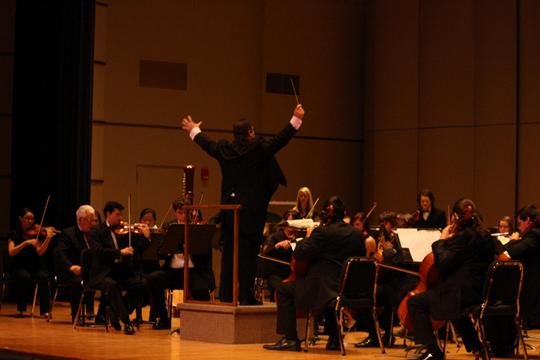 Dimming of the lights, the quick hush of the audience and the lights brightening over the stage. Black formal attire for close to 50 people, but they’re not alone.  Each one brings something with them.  Not only do they have an instrument or two, but it’s what they can do with that instrument that brings the crowd in front of them.

The opening concert for the Symphony Orchestra was held Friday, October 14 at White Concert Hall.

The evening started out with the orchestra’s performance of Richard Wagner’s Die Meistersinger Prelude.  With my limited knowledge of orchestral music, even I recognized the piece.  It was quick and played perfectly, leaving the audience wanting more.

After Chris Kelts thanked the audience and made corrections to the nights program, it was time to start the four part piece of Mozart’s Symphony No. 14.  “Allegro moderato, Andante, Minuetto/Trio and Molto allegro” made up the four movements.  The first of the movements, started off soft with strings.  It incorporated the other instruments at a slow pace but then later picked up.

For the Andante, it appeared to follow a round about direction while focusing on the different instruments. It was a unique way to highlight each section.

Next, the Minuetto/Trio was an example of classic symphony music.  Last was the Molto allegro.  This movement quick paced right from the start.  It seemed to have more excitement and made me think of the urgency to tell someone good news.

After a quick intermission, Tchaikovsky’s “Little Russian,” or Symphony No. 2. was slated to be performed. With my limited musical background, names like Mozart and Wagner were familiar to me.  This was a composer I hadn’t heard of. Like Mozart, Tchaikovsky’s symphony was broken up into four movements.

The first of the movements was the Andante sustention – allegro vivo. This was my favorite of the night.  It started off bold, a good way to bring the audience back after intermission. The symphony produced a sound familiar to a snake charmer, almost hypnotizing me and drawing me in to listen and want more.  I felt like it told a story and it was something different than what I expected in symphony music.

The second movement, Andantino marziale, quasi moderato played a slower less intense sound than the previous movement.  I enjoyed the catchy melody from the woodwinds and strings.

The third movement, Scherzo: Allegro molto vivace started quickly and immediately picked up.  I noticed a solid fluidity in the piece.  It ended abruptly, with one loud almost “bang” sound.

The final movement of the night was the Moderato assai – allegro vivo.  It started almost exactly how the previous movement ended and for a brief moment I wondered If it wasn’t over.  It was definitely a good piece chosen for a grand finale, as it varied in style, pace, intensity constantly.  It had a strong finish, leaving the majority of the audience on their feet for applause.

Overall, I enjoyed the concert.  There was familiar symphony music, easy for the audience to relate to and the type of music you would expect. However, I was pleasantly surprised by Tchaikovsky’s symphony No. 2. It was an entertaining evening and it didn’t cost me a thing.