The Merchant Hosts “Ghouls Night Out” 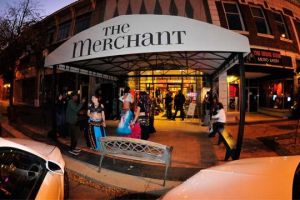 Those in attendance at The Merchant on October 20, 2011 were given a nice treat that included fashion, food, prizes and belly dancing, as well as an absence of any tricks.

Lisa Boyd, owner of The Merchant, located in downtown Topeka on Kansas Avenue hosted a fashion show displaying costumes and other reasonably priced fashions available in her boutique. The event, “Ghoul’s Night Out” was part of Top City Thursday, an important part of the effort to revitalize the downtown area.

The event lasted from 5 to 8 p.m., and the fashion show began at 7 p.m. Prior to the fashion show was a tribal belly dancing performance from Cyreignas Irie Tribal, owned and run by Cyndi Cyreigna Elliot.

Wine and hors d’oeuvres were served, a keyboardist played inside the store and prizes were given away during the fashion show. Prizes included gift cards to: The Merchant, Kansan Grill, Lloyd Zimmer Books and Maps, Warehouse 414 and Personally Yours as well as a personal tribal belly dancing lesson from Elliot was given away.

“We decided to do an adult friendly night out,” said Boyd, who is donating 10 percent of her sales on Top City Thursdays to Let’s Help, a non-profit organization in Topeka.

“Next Thursday is ‘Boo It Downtown,’ a candy crawl for kids.  We are having cotton candy, a clown and a face painter.”

Boyd has collaborated with Martha Pierce, owner of Vintage Van in Lawrence, who helped Boyd organize the show. Both ladies sell used clothing that is unique and fashionable. Pierce is a Washburn alum and is married to David Pierce, a professor at Washburn Law School.

“She does classy, cool stuff,” said Boyd. “We are wanting to work together on a fundraiser in the future.”

Pierce’s shop is on Massachusetts Street, a business she runs with two partners. She also works with fashion design students at the University of Kansas and Johnson County Community College.

“I mostly do vintage designs,” said Pierce. “Anything from turn of the century through the 1980s. Lisa and I have become acquainted and want to help each other.”

Pierce uses her fashion shows in Lawrence to raise money for local charities there.

“We usually raise $2,000 to $3,000 at the replay for our charities,” said Pierce. “The students in Lawrence are always very interested in coming out and showing support.”

Pierce says that she and Boyd’s stores are in line with recycling and the green movement.

“We give pieces of clothing a second chance at life,” said Pierce. “This show tonight definitely highlights The Merchant.”

During the fashion show, Boyd priced the items that the models were wearing. Entire outfits with accessories and purses were usually under $30. The Merchant hopes to open up an area in the basement for people to drink coffee and hang out in the near future.

For more information on The Merchant, including store hours and merchandise, check out their website  at www.themerchantonline.com.