Hough plays it loose for film 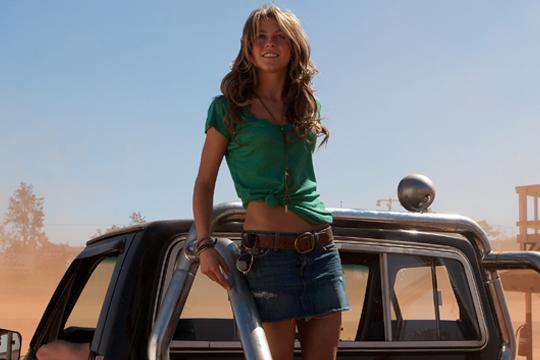 Dancing to success Actress Julianne Hough credits her sucess and much of her fame to her appearance on “Dancing With the Stars.” Hough stars in the re-make of “Footloose,” which opens in theatres this Friday.

Most widely known for being a two-time winner of ABC’s “Dancing with the Stars,” country music singer and actress, Julianne Hough, is getting ready to cut loose in front of audiences worldwide this Friday ainthe remake of “Footloose,” directed by Craig Brewer, comes to the big screen.

Hough said that she owes basically everything to “Dancing with the Stars.”

“I think that the exposure that I got and the fan base have been so amazing and followed me from day one,” said Hough. “[People] know, my music and my acting now, I definitely would not be (wearing that) today without that show.”

Hough said that a lot of people don’t know that she has been singing, dancing and acting her whole life.

“I think each career path that I’ve chosen has fulfilled something different inside of me,” she said. “This has been such an amazing experience doing ‘Footloose’.”

Some audiences might wonder what it is like dealing with all the pressure of creating a remake to an incredibly beloved film.  Hough said if she wasn’t confident, she wouldn’t be promoting this movie.

“And I know Kenny Wormald and Craig Brewer. We are all on this tour right now and going around country,” she said.  “And I think if we were worried, we wouldn’t be doing it.”

Hough said when she first found out they were doing a remake of an iconic movie like “Footloose” she was not looking forward to it.

“It is really close to my heart. I grew up watching this movie and lived in Utah where it was filmed,” said Hough.  “I thought nobody ever does remakes justice, but when I found out that Craig Brewer was attached, there’s nobody that could have done it justice the way that he has.”

Hough said that there were many great moments in the making of the film.

“I mean, all the dances were so much fun, because there was just good energy,” she said.  “The cowboy scene, my mom and my three sisters are actually in, and so that was really fun having them on set.”

Hough said that she knows for a fact, fans of the 1984 film will still enjoy this movie just the same.

“We’ve been doing screenings around town, and die-hard “Footloose” fans that are skeptical about this movie go in so ready to hate on it,” said Hough.  “Then they turn around and come out of the theater loving  this version. It was everything that they loved about the original and so much more.”

Hough said one thing that she felt like she missed from the original film was depth to the character of Ariel, played by Lori Singer.  She felt like she was just kind of a bad girl and was a trouble-maker.

“I saw this version and saw that Craig had re-written her to show the depth that she has and the relationship that her and her father have and then you see why he acts like he does,” said Hough.  “I really wanted it to be my own, and when we were shooting this movie, we really felt like it was our own movie, that this was the first time we were ever shooting this movie and the scene and these characters.”

Hough said there wouldn’t have been a better choice to do this film other than Craig Brewer.

“I think that he is well known for his gritty movies and how real and honest they are. “Footloose,” back in the day,  was not bubble-gum, but when you look back at it, it kind of seems a little cheesy,” she said.  “But it’s very easy to make that cheesy again.”

Hough said she is proud and thinks that people who saw the original are going to be impressed with the things that didn’t need to be there for a generation’s sake, making it more current, and she thinks the people who haven’t seen it are going to be surprised.

“I think that in our time now, we kind of need a movie like this, she said.

“There are not a lot of teenage movies that have a lot of morals and messages and heart.  It’s all about the CGI, which don’t get me wrong, I love watching, but I think it’s hard to come across a good teenage movie.”