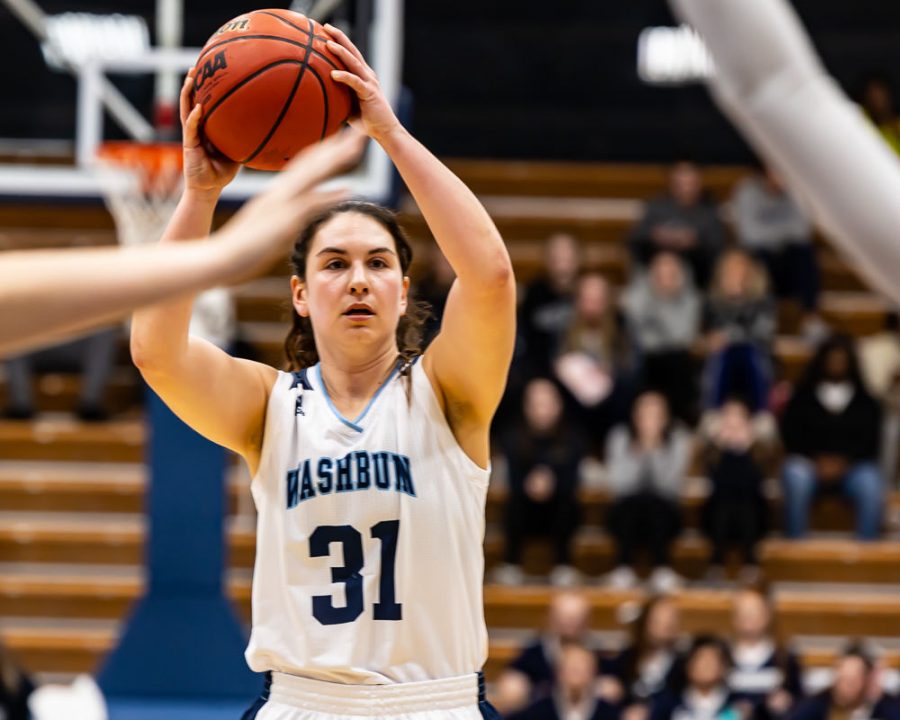 The 2-1 Ichabods Women’s Basketball team hosted NAIA-opponent Baker University. The Ichabods came into the game averaging 79.3 points on offense and allowing 71.3 points on defense. The women were looking to achieve their third straight win of the season.

Senior guard Shelbe Piggie scored two layups and led the Bods to a 7-0 start. Washburn’s tough defense and almost perfect shooting extended the lead to 17-7 with four minutes left, bringing the score to a favorable 25-10 advantage at the end of the first quarter.

Throughout the second quarter the Ichabods continued to dominate Baker University in all phases of the game. A 10-2 run by Washburn in the beginning of the quarter was led by two triples from Senior guard Reagan Phelan. The Ichabods finished out leading 46-23 at the half. The team shot 57% from the three-point line. Piggie and Phelan led scoring at half with nine points each.

The third quarter started a little more competitive with Baker starting to hit shots behind the arc. Things started to slowly go right for Baker, but halfway through the quarter, freshman guard Abbie Oliver and senior forward Sabela Reigosa came off the bench and dominated the paint. They lead the bods to a 16-6 run to end the quarter and increased the Ichabods lead to 69-37.

Washburn’s shooting started to cool off in the fourth quarter, but it was too late for Baker, and the Ichabods beat Baker University 89-47.

This was Washburn’s highest scoring game of the season – shooting 50% from the field.

Head Coach Ron McHenry commented on the impressive performance by his team, and how important every player on the squad is.

“We are headed in the right direction. I thought our bench played well. They are coming along well, and we will need them to be as good of a team as we want to be. Also, the veterans played well today, and sometimes in a game like this it is easy to lay back and just let other people play. They wanted to take charge, and played the game at a high level of intensity,” said McHenry.

Senior guard Shelbie Piggie, who had a season high in points scored with 18, commented on what will be most important for the team to continue with this early success along the season.

“We need to be mentally prepared and to be able to adjust on the fly, able to give our teammates the ball, and play defense. I think we will be fine if we can do those things,” said Piggie.

The Ichabods move to 3-1 for the season and will travel to Kansas City, Missouri, Saturday, Nov. 23 to face Rockhurst University at 5:30 p.m.