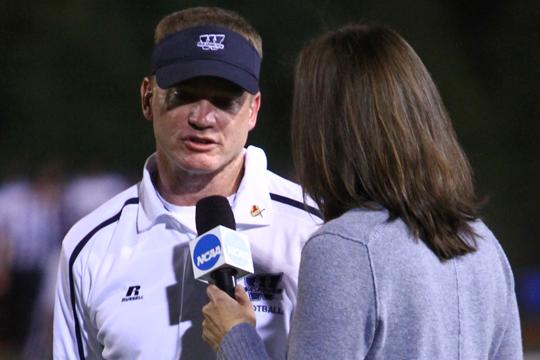 Craig Schurig now has the most recorded wins of any Ichabod head coach, commanding the gridiron the same way his favorite dinosaur tyrannosaurus rex ruled the Cretaceous period.

While he acknowledges what an accomplishment he has made, Schurig has other matters on his mind.

“Really, during the season, you’re kind of just looking at, ‘Hey, we got to get ready for this next game,'” said Schurig. “That’s kind of the way the football season goes. You get about 10 to 12 hours to enjoy if you win Saturday, and then you’re on for the next week.”

After entering the workforce with an engineering degree, uncommon for most college coaches, Schurig decided to try coaching and joined the coaching staff of his alma mater the Colorado School of Mines before eventually finding his way to Washburn.

“I was fortunate that I was able to get into college coaching,” said Schurig. “Then I was hired out of Pittsburg State for nine seasons, and then was hired here as head coach back in 2002.

“It was just something I really wanted to do, something I had a passion for, and I was fortunate that someone would pay me to do it. You get and break, and you hope that you can go with it.”

Growing up, Schurig played several sports, but by the time he entered high school, it was clear that football was the path he had the best chance to follow.

“I wasn’t tall enough to do basketball and wasn’t a good enough baseball player,” said Schurig.

As a young man, Schurig joined the Orediggers football team at the small CSM.

“I wasn’t good enough to play at a major university, and I enjoyed it,” said Schurig. “I enjoyed the game and the competition of it.”

When Schurig is away from coaching, playing golf, or exercising, he spends as much time with his family as he can and struggles to find new ways to expand and improve his team.

“Some of the technology stuff has passed me by,” said Schurig. “The Facebook and the Twitter, I’m trying to get involved in it for recruiting purposes.

“Some of the computer technology I’m pretty awkward with. I can turn on the computer, and I can operate the remote, but that’s about it.

Schurig’s calm and friendly demeanor has helped him in recruiting new players for the Ichabods.

“When he recruited me, I just remember him being really down to earth,” said Willie Williams, sophomore linebacker. “All the other colleges, the coaches were uptight and wanted to talk about business right away.”

Nevertheless, once game time is upon the Ichabods, Schurig can show a different side of himself to pump up his team.

“It was the first time I had a nice head coach,” said Williams. “When it’s time to get into a real intense game, he turns the switch on and getting us hyped, saying chants. He’s really motivational.”