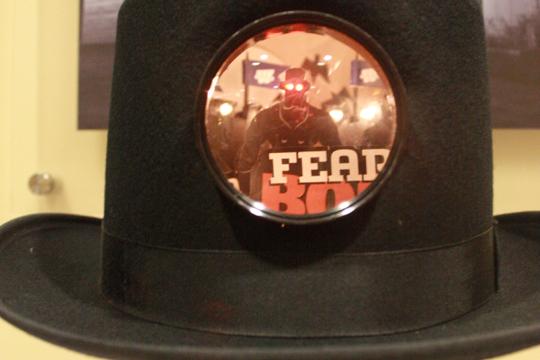 Hats off Washburn’s student organizations prepared an array of “Fear the Bod” themed top hats for the Washburn Top Hat Competition, as part of Homecoming. The hats were voted on during the WU Ball and the winners will be announced Friday and auctioned off as part of WUBAY.

When looking at the Ichabod logo, one notices many objects. First, the long stride of the Ichabod represents enthusiasm and courage. He is truthful and knowledgeable, as shown by the book in his hand. Finally, he is courteous and democratic as shown by tipping his top hat as he walks by.

This top hat has been a part of the graphic design since 1934. However, it was not until 2002 when Denise Ottinger, vice president of student life, came up with the idea to have a top hat decorating contest. The first year had about 40 participants and since then, they have had at least that number of hats in the competition.

Vickie Baer, secretary to Ottinger, takes a big part in organizing this event.

“This event is sponsored by a homecoming committee that is made up of 25-30 various organizations around campus,” said Baer.

To be eligible for the competition, the teams must sign up and turn in their forms to the student life office. Once they are provided with a hat, they may decorate it based on a Washburn Ichabod theme or the official homecoming theme. This years is “Fear the Bod.”

Once Monday rolled around, the hats were due, and the judging began.

“Judging is based on originality, color, creativity, craftsmanship, durability, and use of theme,” said Baer.

The judges not only give points based on their opinions, they also give plaques to special sections. These include: most creative, best homecoming theme and best Washburn spirit.

In addition to the judge’s vote, the community has the ability to vote in the form of penny votes. Whenever the hats are on display, typically from 10 a.m. to 1 p.m. the week of homecoming, students and community members can put money into the jars correlated with each hat. The top three get point totals as well.

The overall winners, including first, second and third, will receive plaques for their efforts and creativeness. However, the hats go to a greater cause as well.

“Throughout the week, a silent auction goes on for each hat that is created,” said Baer. “The accumulation of all of this money is directly donated to the United Way of Greater Topeka.

There is the option of buying them outright for a $50 price at WUBAY.

Baer and Ottinger do not only help organize this activity, but also participate in the event.

“Typically, we focus on the homecoming theme that is designated for that year,” said Baer. “But sometimes, it is just the idea that we can work best off of.”

In fact, along with Ottinger’s ideas, Baer takes four to six hours to put together a hat to submit for the competition.

“We love supporting all of Washburn’s activities,” said Baer. “But putting together a good hat is also something we love to do.”