Receiver steps up for Ichabods 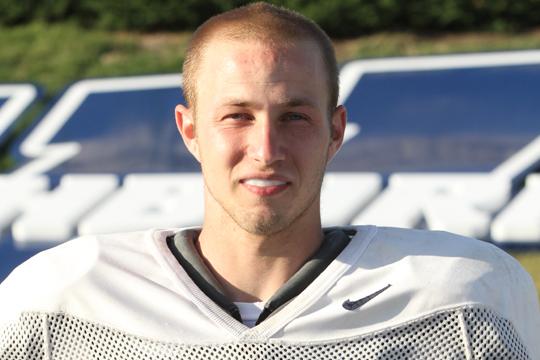 One of Washburn University’s three starting receivers, Matt Kobbeman, a sophomore majoring in criminal justice, has proven himself worthy to his coaches already, after only two games this season.

Kobbeman started his football career as a sophomore at Shawnee Heights High School in Topeka as a receiver.

“I’m home grown, if you’d say,” said Kobbeman. “I’ve had my friends and family supporting me so far throughout my entire career. That’s one of the reasons as to why Washburn University was my first choice in a college.”

When asked about the start of his college football career, Schurig said that Kobbeman spent his freshman year learning from one of Washburn’s current alumni.

“When Matt was a freshman, he red-shirted and worked underneath some very good players—one of them being Joe Hastings, a current player for the San Francisco 49ers.”

As a friend and mentor, Hastings has left a lasting impression on Kobbeman.

“I haven’t been able to talk to him as much as I’d like to, but I actually just talked to him two weeks ago,” said Kobbeman. “He’s doing good.”

Kobbeman has worked hard for his starting position said Schurig.

“He’s put in his time. That’s for sure,” said Schurig. “Matt learned early on, so he knew he had a good chance this season to come in and start.”

Working hard everyday during practice has definitely paid off for Kobbeman.

“I feel like my performance against Sioux Falls has been my stronger performance so far this season—I had three catches, one of which was a touchdown catch.”

Kobbeman had one catch during the second game of the season against the Lincoln University Tigers.

“We didn’t throw the ball a whole lot against Lincoln,” said Kobbeman. “But we ran the ball really well.”