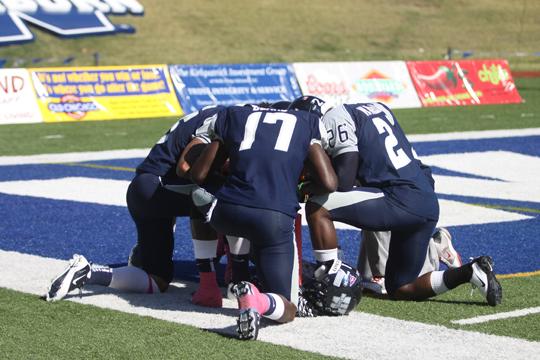 It has been a storybook season for Washburn football.The Ichabods were all smiles Saturday after crushing the University of Central Oklahoma Bronchos in a lopsided 48-3 victory.

The WU defense responded on the ensuing drive by UCO with a joint sack by junior linebacker Jahmil Taylor and freshman offensive lineman Bryan Dale on Central Oklahoma junior quarterback Ethan Sharpe forcing the Bronchos to punt after their first possession.

The Ichabod’s following drive resulted in two forced fumbles by Washburn senior running back Justin Cooper. The second as recovered by UCO’s junior defensive back Keno Meadows, putting the Bronchos on the WU 39-yard line. After a series of incomplete passes, UCO attempted a 55-yard field goal by junior kicker Chris Robbs, who came up short. The failed attempt set up Washburn’s second score of the game with a 21-yard field goal by junior kicker, Jeremy Linn, closing out the first quarter, 10-0.

The second quarter began with a pair of punts. This ceased after a 58-yard touchdown reception by sophomore wide receiver DeJuan Beard put Washburn up 17-0. On their next possession, the Bronchos scored their first and only score, a 40-yard field goal making the score, 17-3. Washburn senior quarterback, Dane Simoneau, delivered one more score before ending the second half with another TD reception for 8-yards by Beard, extending the lead to 24-3.

The Broncho’s first drive of the third quarter appeared to end prematurely by a sack on UCO’s junior quarterback Ethan Sharpe by Washburn senior defensive end Corey Walker, but it was negated by a facemask penalty, giving the Bronchos a fresh set of downs.  After an inability to convert on downs, UCO called on their punting unit once again.

The Ichabods marched 73 yards deep into Broncho territory to the 6-yard line, but they only came away with a Jeremy Linn field goal. UCO’s next drive brought more woes after a fumble by UCO freshmen wide receiver Steve Caldwell on the Broncho’s 24-yard line. The Ichabods capitalized on the turnover with a 23-yard TD reception by sophomore wide receiver Ronnell Garner. Washburn scored 10 unanswered points to finish out the third.

The final quarter continued the Ichabod’s momentum with a ground breaking 75-yard run to the Broncho’s 20-yard line by Washburn freshman running back Sean McPherson. This run set up yet another TD reception by Beard, packing on more points to the scoreboard, 41-3.

UCO rallied down to the WU 30-yard line before a forced fumble on UCO sophomore quarterback, Landon Greve. The Ichabods, sitting at a comfortable lead, started two different quarterbacks for the final ten minutes of the game.  Freshmen quarterback, Mitch Buhler, completed his first TD pass of the season for 21-yards by Garner, his third of the night and the Ichabod’s final score.  Garner would play a huge part within the offense, having six catches for 127-yards with two touchdowns on the night.

“I don‘t think I play a huge role,” said Garner. “I just think that I do what I can do for the team to win the game. Everybody has a part to play in the offense, it‘s not just me.  I can‘t blame it all on me. It starts with everybody, all 11 other people.”

“Everybody” is exactly what it took for the team to prevail. Simoneau was 19 of 31 for 338 yards with 5 TD’s, Beard had five catches for 117 yards and 3 TD’s and sophomore Matt Kobbeman had five catches for 60 yards.  Junior tight end Ryan Mertz added to the explosive offense with two catches for 44 yards and one TD. McPherson tallied a breakout game with 16 carries for 120 yards.

Washburn’s next game will be on the road where they will face off against the Northwest Missouri University Bearcats. The game will be held in Marysville, Mo. Saturday at 2 p.m.  Since 2006, the last five meetings between these two have been WU losses that were decided by five points or less in each game. The Ichabods will be tested this week but are optimistic about the outcome.

“Against Northwest, we will have to play a little bit better,” said Schurig. “We feel like we match up really well with them. I don’t think we have to play above what we’re capable of. As long as we play well, we’ll be in good shape.”