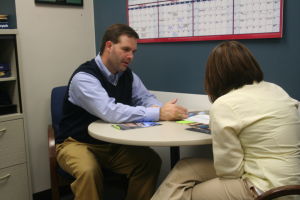 News this afternoon broke of the decision to release Morgan Boyack, now former director of admissions at Washburn University.

When reached for comment, Amanda Hughes, assistant director of university relations said that the university does not comment on what she termed “personnel issues” and directed any further questions to lawyers representing the university.

News of Boyack’s dismissal come as a surprise to the campus community.

“I liked him personally but also thought he was professional as well,” said Stephen Angel, chair of the chemistry department and president of faculty senate. “He was always open to hearing my concerns. I’m very sad to hear this news.”

According to Washburn admissions numbers, since becoming director of admissions, Boyack had presided over modest by steady growth at Washburn.

According to a university press release dated Sept. 27, Washburn experienced a 6.2 percent growth in straight from high school admissions topping off at 574 students, the largest in Washburn history. The university also had an increase of 751 in total credit hours enrolled as well. All of this occurred this fall since Boyack had been director of admissions

Currently the university youtube channel still features a video of Boyack talking about himself briefly.