Ichabods get Gorillas off back, move atop MIAA 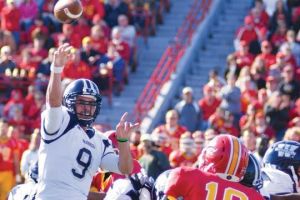 Thousands of fans packed the Carnie Smith Stadium as the No. 9 Washburn Ichabods took on the No. 2 Pittsburg Gorillas.

After action back and forth filled with offensive drives and defensive stands, it was the second and fourth quarter that were really the difference makers in helping the Ichabods come away with the upset win, 43-25.

“We knew they would be good,” said senior fullback Greg Schoenberg, fullback. “It was going to be a fight from beginning to end.”

However, this did not change the coaches message to the players. Every week, they give the same message; play for each other, and play as a family.

Washburn did just that as they got the ball first and began to drive. However, after going for it on fourth down two drives in a row and not converting, it was up to the defense to step up and keep the Gorillas out of the endzone.

Senior linebacker Marty Pfannenstiel acknowledged the danger the opposing offense gave and realized they would have to make very few mistakes, if any.

“They have that triple option that can be very effective,” said Pfannenstiel. “We just had to have the mentality of being disciplined.”

The defense did just that, as they kept the offense off the board through the first three quarters. They made several big plays throughout the game, as well.

Some instances of defensive gumption were keeping the Pittsburg field goal unit from making a field goal all day, a 52-yard fumble recovery for a touchdown by Devon Connors and intercepting a pass to finish the game off.

Head coach Craig Schurig was extremely impressed, not only with his defense, but his defensive coaches, as well.

“It is so difficult to prepare for a team like this within one week,” said Schurig. “Our coaches did an outstanding job of getting the defense ready to play to this level.”

With the level of play the defense was giving, the offense realized it needed to step up and put points on the board.

It was not until the fourth Washburn possession that they scored. After a 44-yard run by running back Justin Cooper, the Ichabods faced a fourth and 3. However, senior quarterback Dane Simoneau connected with tight end Ryan Mertz for a 17-yard touchdown pass.

“Our defense kept giving us the ball back well,” said Simoneau. “We needed to sustain drives and give the defense more of a rest.”

From there, the offense put up 24 points through the second quarter. They kicked a field goal in the third quarter and finished the fourth quarter with 16 more points.

“First, it starts up front with the linemen making blocks all day long,” said Simoneau. “The receivers got open today and made my job easy. The offense just clicked.”

Being a back-and-forth game, it kept the players, coaches and fans on edge throughout its entirety. In fact, with 9,000 fans rooting against the Washburn Ichabods, the players and coaches admittedly kept looking to one small corner of the stadium where a group of Washburn fans were sitting.

Coach Schurig gave a big shout out to these fans.

“I don’t think there could have been a more momentum-swinging game,” said Coach Schurig. “That is as well as we’ve played them.”

Another big part of the game was the opening kickoffs performed by both teams. After a 104-yard kickoff return for a touchdown by PSU, the kickoff team for Washburn was slightly hesitant to kick back to him again.

However, this proved to lead to advantages for Washburn. Twice in the fourth quarter after scoring, the Ichabods were able to pooch kick the ball in front of the back two returners. The ball bounced back towards the blue and white players rushing down and both times Washburn was able to recover it.

“Honestly, we were scared to kick back to that guy because he’s a great returner,” said Schurig. “We pooch kicked and it just seemed to work.”

However, in another upset on the day, Missouri Western State University beat NW Missouri. This caused NW Missouri to have two losses and Washburn and PSU to be tied with one loss. Since Washburn has beat Pitt, this means that Washburn is currently ranked first in the conference alone.

With a win against Central Missouri next weekend, Washburn wins the MIAA Conference outright.