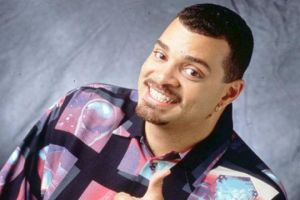 The African American Male Leadership Council had a special presentation for a group of young men last Friday night on Veterans day, when Sinbad the Entertainer came to the Topeka Performing Arts Center before his show.

The journey, according to Sinbad, started for him when he was five or six years old.

“I had a lot of ideas growing up,” said Sinbad, “I wanted to play basketball. I wanted to be in a band. I wanted to perform—it didn’t matter as long as I dreamt it was possible.”

As a child, Sinbad was not allowed to watch TV as much as the youth of today.

“I didn’t have video games,” said Sinbad. “I actually went outside and played in my yard.”

Years later, his imagination took him places he never thought he would go.

“I was so hung up on playing pro-basketball, and I didn’t know what I was doing,” said Sinbad. “So, I joined the military, and it saved my life.”

Professionally, Sinbad’s life was changed the night of the military talent show.

“I discovered that I wanted to perform comedy more in my life,” said Sinbad. “All because a friend didn’t want to go up on stage.”

Sinbad performed in as many places as he could after that night.

“I sometimes went to night clubs to perform,” said Sinbad. “I had bottles thrown at me, and the D.J. even unplugged my microphone.”

Those amateur nights only pushed Sinbad to work harder at pursuing his dream.

“If somebody else can do it, then you can too,” said Sinbad. “You may not be as great as that person, but you sure can outwork them.”

A few years later, Sinbad was hired for a live television show.

“I warmed up the audience for the Cosby Show,” said Sinbad. “A few weeks later, Bill Cosby got me a role on A Different World.”

So, as Sinbad stood before the young men on Friday night, he offered one central piece of advice.

“Sometimes, the difference between success and failure is the direction of the journey,” said Sinbad. “Don’t worry about the little things you come up against. Take that first step and everyone and everything that is supposed to show up—will.”